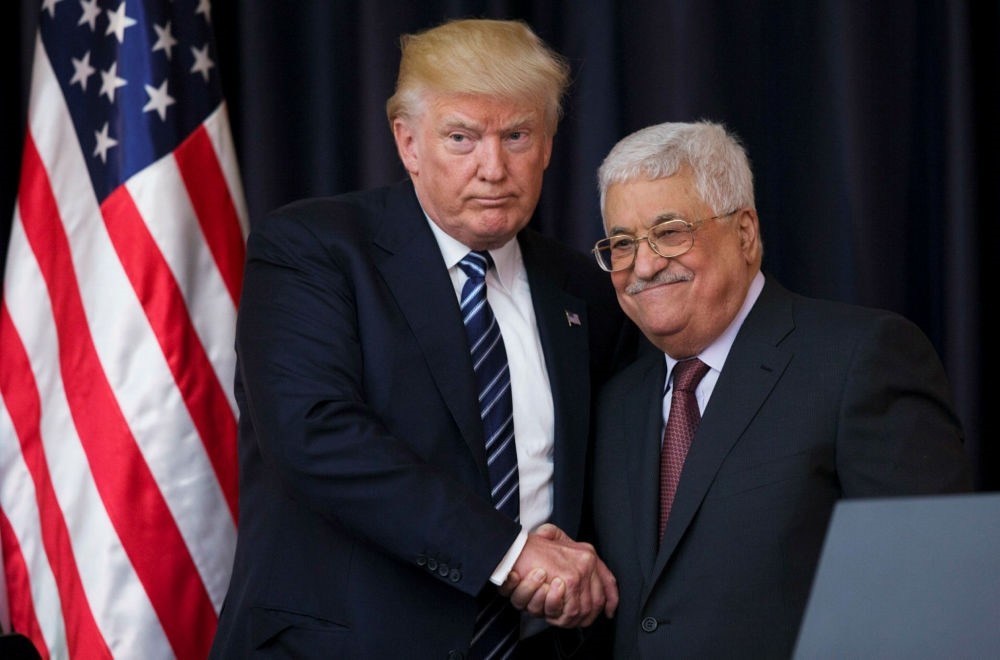 U.S. President Donald Trump shakes hands with Palestinian President Mahmoud Abbas after they held a joint press conference at Abbas' residence in Bethlehem, the West Bank, May 23.
by Compiled from Wire Services May 24, 2017 12:00 am

During his quick stop in the region, U.S. President Trump pushed for elusive peace between Israel and the Palestinians while flashing out no specifics on how to make progress in resolving the frozen conflict

U.S. President Donald Trump talked up the prospects of peace between Israelis and Palestinians on Tuesday, saying he believed both sides were committed to an historic deal, but he offered no concrete proposals on how to get there.

Trump met with both Israeli Prime Minister Benjamin Netanyahu and Palestinian Authority President Mahmoud Abbas during his quick stop in the region. Speaking at the Israel Museum, he declared both sides ready to move forward, though there were no tangible signs of the dormant peace process being revived.

During his visit, Trump notably avoided all of the thorny issues that have stymied peace efforts for decades. He did not way in Israeli settlements, the status of Jerusalem or even whether the U.S. would continue to insist on a two-state solution giving the Palestinians sovereign territory.

"I am committed to trying to achieve a peace agreement between the Israelis and the Palestinians and I intend to do everything I can to help them achieve that goal," he said, with the 50th anniversary of Israel's capture of territories that Palestinians seek for a state approaching next month.

"President Abbas assures me he is ready to work towards that goal in good faith, and Prime Minister (Benjamin) Netanyahu has promised the same. I look forward to working with these leaders towards a lasting peace."

While Trump has spoken frequently in the months since he took office about his desire to achieve what he has dubbed the "ultimate deal", he has not fleshed out any strategy his administration might have towards achieving it.

The last talks between the Israelis and Palestinians, led by former U.S. secretary of state John Kerry, broke down in April 2014 after around a year of largely fruitless discussion. While both Netanyahu and Abbas have made positive noises about their readiness to negotiate, both also face domestic constraints on their freedom to maneuver and strike a deal.

Netanyahu must deal with opposition from rightist elements within his coalition who oppose any steps towards a two-state solution to the decades-long conflict. Abbas's Fatah party is at sharp odds with the Hamas, which is in power in Gaza, leaving no unified Palestinian position on peace.

Trump was enthusiastically received by Netanyahu, who leapt to his feet when the president declared that his administration "will always stand with Israel." Netanyahu had a frosty relationship with former U.S. President Barack Obama, but has lavished praise on Trump throughout his visit.

Yet some Israeli officials are less certain of Trump. He's taken a tougher than expected line on settlements, saying he doesn't believe they help the peace process, though he's stopped short of calling for a full construction freeze. He's also backed away from his campaign pledge to move the U.S. Embassy in Israel from Tel Aviv to Jerusalem, bending to the same security risks as other presidents who have made that promise.