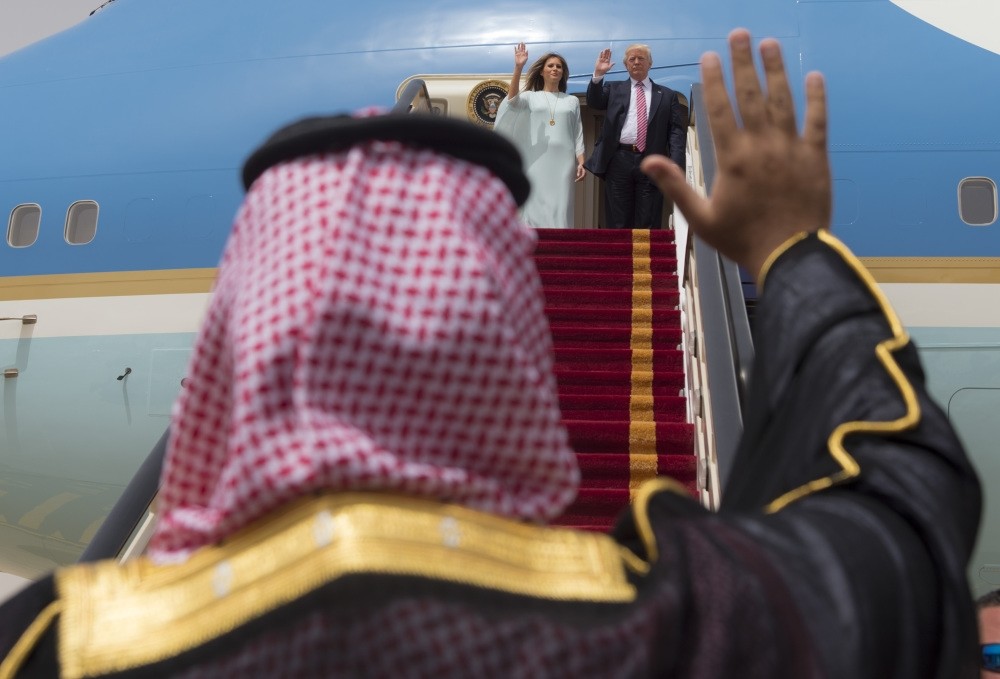 Using the power struggle between Saudi Arabia and Iran and taking Israel's concerns over the Shiite state's growing influence in the region and presence in Syria, Trump's basing the U.S.'s Middle Eastern policy on an alliance against Tehran

Donald Trump, for his first state visit as U.S. president, headed to the Middle East, starting with Saudi Arabia before flying off to Israel.

The businessman-turned-president, Donald Trump signed an arms deal worth more than $300 billion with Riyadh, before delivering a strong message of support for Israel. Trump said he was committed to ensuring peace with Palestinians, without offering much detail.

Apart from the economic side and the Israeli-Palestinian issue, his trip was important as it categorically indicated that the new U.S. president aims to isolate Iran, which has reelected President Hassan Rouhani and showed eagerness towards reforms and avoid international sanctions.

Trump's emphasis on the Iranian elements of threat against the Muslim countries in the region as well as Israel, was a reflection of his new policy in the region, which can simply be described as building an alliance against Iran.

Unlike his predecessor Barack Obama, who was considered to have made a mistake through signing the nuclear deal with Iran, Trump was given a warm welcome. He seemed overjoyed with the arms deal as he repeatedly used the word "jobs," said it was a "tremendous day," and spoke of "hundreds of billions of dollars of investments in the U.S. and jobs, jobs, jobs. So I would like to thank all of the people of Saudi Arabia."

Despite the seemingly great achievement in terms of economy, Trump continued to be under fire at home, for his and his team's alleged relations with Russia.

"The political turmoil back in Washington dominated headlines in the U.S. and cast a long shadow over the start of Trump's trip, which will include stops in Israel, the Vatican, Italy, and Belgium. His firing of the Federal Bureau of Investigation [FBI] head James Comey on May 9 and the subsequent appointment of a special counsel to investigate Trump's 2016 presidential election campaign ties to Russia have raised the question of whether he tried to squelch a probe into allegations of a Russian connection," reported Reuters.

Unlike his predecessors, Trump considers Iran, not Russia as the primary threat in the region; despite the clear cooperation between the two countries on regional affairs, especially in Syria.

Talking to Reuters, Saudi foreign minister Adel al-Jubeir summed up Trump's meetings with Saudi King Salman bin Abdulaziz as "the beginning of a turning point" in relations between the U.S., Saudi Arabia, and its Gulf allies. The same report also said that both al-Jubeir and U.S. Secretary of State Rex Tillerson made it clear that arms deal was a strong message to Iran.

"Tillerson said Rouhani should use his second term to end Iran's ballistic missile testing and stop promoting extremism in a volatile region. He said he had no plans to talk to his Iranian counterpart, but that he in all likelihood he would do so 'at the right time.' Al-Jubeir said both Trump and King Salman agreed that action had to be taken to ensure Iran did not continue its 'aggressive policies in the region,'" the report added.

Before leaving the Middle East for Europe, Trump's second stop was Israel where he, again, made anti-Iran statements and said that this threat drives Arab countries and Israel closer.

Israel has long been worried about Iran's growing influence in the region and presence in Syria. The U.S. inaction in Syria apparently disturbs Israel as Iran has gained a strong foothold in Syria. Since the civil war broke out, Israel has supported Bashar Assad's removal and issued warnings about the advancement of Iran and its proxies. Obama, however, was very reluctant to take any decisive step that would change the war's fate.

Even though he said he was ready to make necessary efforts to solve the conflict between Israel and Palestinians, Trump mostly focused on Iran. "That includes advancing prosperity, defeating the evils of terrorism and facing the threat of an Iranian regime that is threatening the region and causing so much violence and suffering," he said.

The Israeli side was happy with his statements and supported the idea that the Arab countries and Israel had to enter in a rapprochement. It is considered that Saudi Arabia and Israel may establish relations in near future, with the aim of moving together against Iran. The Middle East, which has been troubled by sectarian conflict since the early years of Islam, was relatively calm under the Ottoman rule. The region has been dragged into a new wave sectarian violence, as anachronistic disputes have been triggered by regional powers with the intention of expanding their influence.

Iran, with a centralized Shiite version of Islam and Saudi Arabia, dominated by the strict religious jurisprudence of Salafi-Wahhabi policies, have entered a competition to influence the region through their sectarian policies, which has only made the people of the region suffer.

Meanwhile, the renewed conflict has paved the way for the Trump administration to determine a new policy in the region. The Gulf states, led by Saudi Arabia along with Israel are likely to further their cooperation with the U.S. to battle Iran and its proxies in Yemen, Iraq and some parts of Syria.