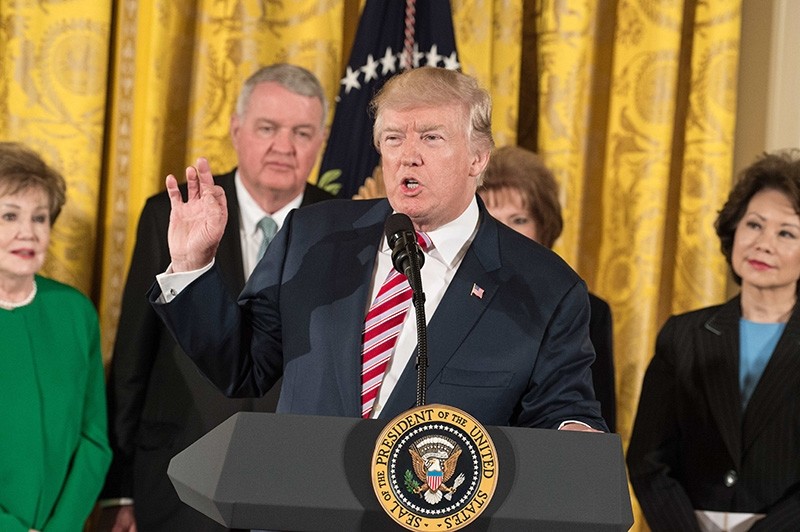 US President Donald Trump announces the Air Traffic Control Reform Initiative in the East Room at the White House in Washington, DC, on June 5, 2017. (AFP Photo)
by Compiled from Wire Services Jun 06, 2017 12:00 am

"So good to see the Saudi Arabia visit with the King and 50 countries already paying off," Trump wrote in a series of tweets.

"They said they would take a hard line on funding extremism, and all reference was pointing to Qatar. Perhaps this will be the beginning of the end to the horror of terrorism!"

So good to see the Saudi Arabia visit with the King and 50 countries already paying off. They said they would take a hard line on funding...

He had earlier said he had focused on fighting the "funding of radical ideology" during talks with Muslim leaders in Saudi Arabia last month. "Leaders pointed to Qatar - look!" he said.

Qatar said it regretted the coordinated decision by Saudi Arabia, Egypt, the United Arab Emirates and Bahrain to cut diplomatic relations on Monday.

"The measures are unjustified and are based on claims and allegations that have no basis in fact," the foreign ministry said.

Qatar said the decisions would "not affect the normal lives of citizens and residents."

Saudi Arabia and Bahrain were the first to sever all diplomatic ties with Qatar, citing national security concerns.