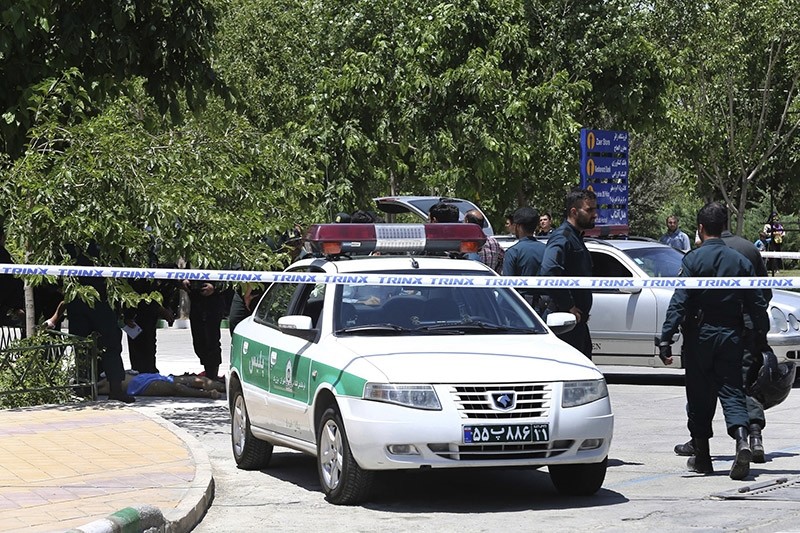 The body at background left, lies on the ground while police control the scene at the shrine of late Iranian revolutionary founder Ayatollah Khomeini, just outside Tehran, Iran, Wednesday, June 7, 2017 (Reuters Photo)
by Daily Sabah Jun 08, 2017 12:00 am

A total of 14 people have sustained wounds from an acid attack in Tehran, according to reports from the Iranian Labour News Agency (ILNA), as the country is alarmed after Daesh-led terror attacks which left 16 dead Wednesday.

The attack took place in Fedaiyan Park, located in the southern part of the city, when two people began arguing. One of the two then threw acid in all directions, injuring 14 people who were nearby.

A statement from Iranian security forces said that the incident was the result of a personal dispute and did not pose a greater security threat, such as terrorism.

Judge Mohammad Shariari of the Tehran criminal court echoed that statement, denying any link with the Daesh terror attacks in Tehran on Wednesday that killed 16 and wounded more than 40.

The chief of Tehran's bureau for organized crime stated that 14 people were injured by a person of around 40 years of age.

The wounded were taken to nearby hospitals and all were later released after treatment for minor burns and blisters.

On Wednesday, Daesh gunmen and suicide bombers carried out coordinated terrorist attacks on the Iranian parliament and the tomb of revolutionary founder Ruhollah Khomeini. It was the first time the terrorists targeted Iran, which provides ground forces against Daesh and other terrorist groups in Syria and Iraq.