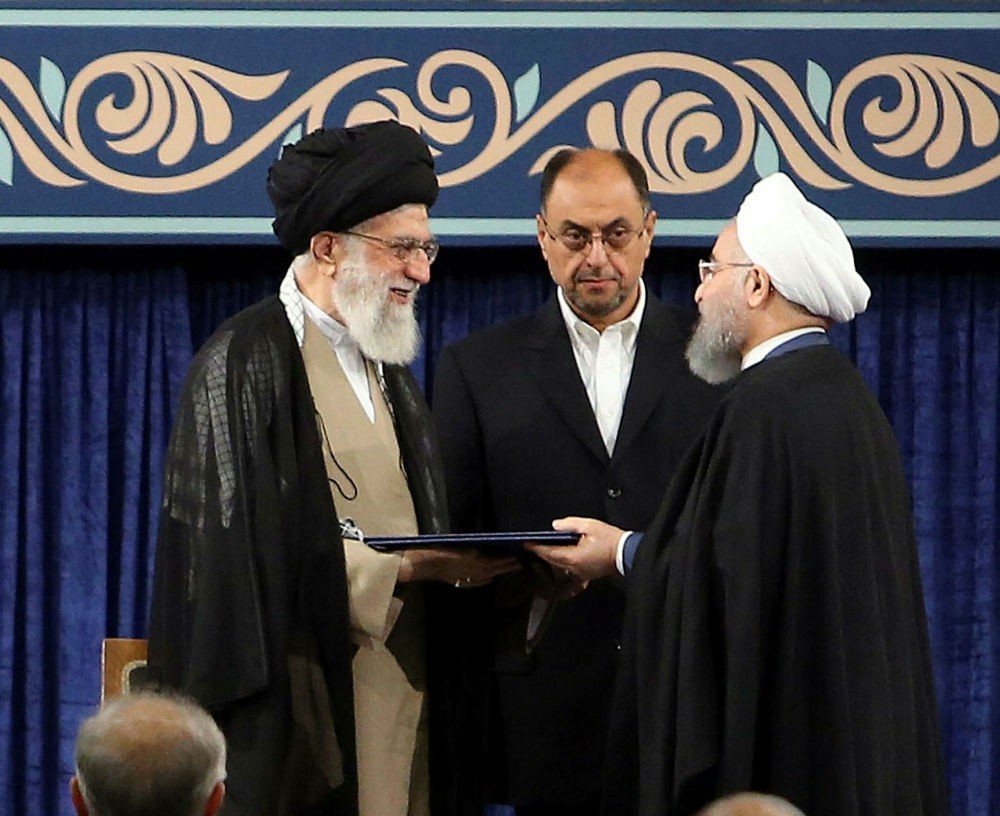 Iranian President Rouhani vowed to keep up his efforts to end Iran's isolation as he was sworn in for a second term a day after U.S. President Trump signed new sanctions

Iranians President Hassan Rouhani vowed to keep up his efforts to end Iran's isolation as he was sworn in by the Islamic republic's supreme leader Ayatollah Ali Khamenei following his re-election in May, a day after U.S. President Donald Trump signed a bill increasing sanctions against the Islamic Republic.

"We will never accept isolation," Rouhani said as he was sworn in in front of top political and military officials. "The nuclear deal is a sign of Iran's goodwill on the international stage." Khamenei took a tougher line, saying Iran must not fall for Washington's "tricks".

"The enemy's hostility has made us more resistant," the supreme leader said.

Tehran said the new measures violate its 2015 deal with world powers that eased sanctions in exchange for curbs on its nuclear program, an agreement which Trump has repeatedly threatened to tear up.

Iranian officials said they have prepared a 16-point document for how they will respond to the new sanctions, without giving details. Rouhani will be sworn in on Saturday and then have two weeks to present his cabinet to parliament for a vote of confidence.

Under Rouhani's watch, Iran emerged from international isolation in 2015 when it struck a deal with six world powers to curb its disputed nuclear program in exchange for the lifting of financial and economic sanctions in place for a decade.

But his quest to parlay fragile detente with the West into financial infusions to rebuild Iran's oil-based economy has been slowed by investors' fears of pre-existing U.S. sanctions and suspicions among powerful hardline acolytes of Supreme Leader Ayatollah Ali Khamenei of any rise in Western influence.

Iran, which has been accused of exposing sectarian fault lines in the region, especially in Yemen, Syria and Iraq, tried to soften its rhetoric as Rouhani said there should be greater unity between Shiites and Sunnis and that they had coexisted side by side peacefully for hundreds of years. During the Barack Obama era, Iran enjoyed the opportunity to fill the vacuum in the Middle East after the White House abandoned its traditional allies, like Turkey and Saudi Arabia.

Referring to Iran as "the number one terrorist state," the U.S. president said the Middle Eastern country supplies money and weapons to terrorist groups. The Trump administration hit the ground running, re-imposing sanctions against Iran in its first weeks in office and also instating restrictions against those who are complicit with Tehran.

The Iranian president championed a nuclear deal with the United States and five other major powers in 2015 that led to the lifting of most sanctions against Iran last year, in return for curbs on its nuclear program. Gulf Arab states expressed support for the deal, but also fears that the lifting of sanctions would enable Tehran to pursue destabilizing policies in the Middle East.

Britain, France and Germany who signed the deal alongside Russia, China and the United States remain firm backers of the agreement and are eagerly seeking to rebuild trade ties with Iran despite logistical problems caused by U.S. sanctions. French energy giant Total defied U.S. pressure in July by signing a multi-billion-dollar gas deal with Iran.

Meanwhile, Rouhani also faces challenges at home. Since the election, he has engaged in a war of words with the Revolutionary Guards over their outsized role in the economy -- although they have since sought to bury the hatchet with a public show of unity.

Much of Rouhani's popularity has been built on his promise of greater civil liberties, including more rights for women, but Iran has still had only one female cabinet member since the 1979 revolution -- ironically under hardliner Mahmoud Ahmadinejad. The government line-up is due to be officially unveiled on Saturday at a high-profile inauguration ceremony in parliament in the presence of foreign guests, including EU foreign policy chief Federica Mogherini.