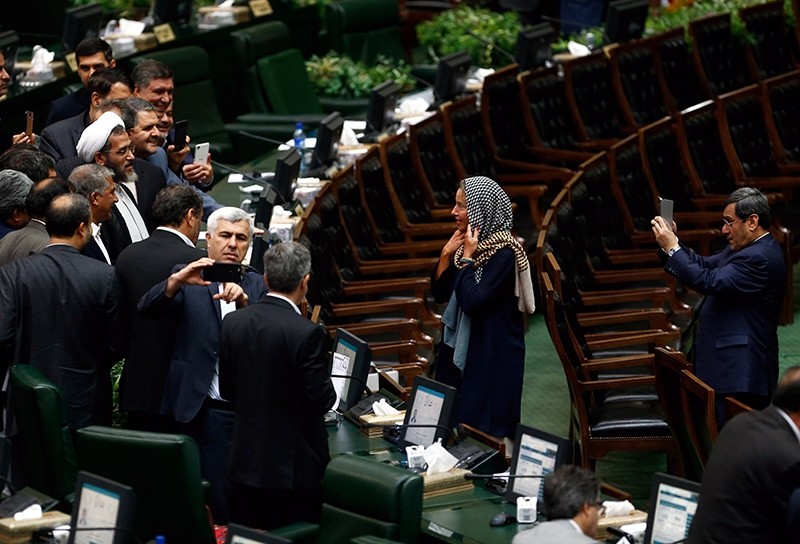 Iranian MPs take souvenir picture with EU foreign policy chief Federica Mogherini at the Iranian parliament after president Hassan Rouhani was sworn-in for his second term of presidency, at the parliament in Tehran, Iran, August 5, 2017. (EPA Photo)
by Daily Sabah Aug 06, 2017 12:00 am

Iranian lawmakers came under fire Sunday after scores of male members of the parliament rushed to take photos of and with EU foreign affairs chief Federica Mogherini.

Mogherini traveled to Tehran to participate in the inauguration of President Hassan Rouhani, who was re-elected in May.

Shortly after the ceremony ended, the EU's top diplomat found herself surrounded by several MPs snapping pictures with their phones.

Many social media users criticized and ridiculed the lawmakers for "humiliating" themselves and their country.

MP Alireza Salimi urged the committee overseeing the conduct of members to probe the incident, calling it "self-surrender to the West."

One of the lawmakers who rushed to take a photo with Mogherini tried to justify the behavior by saying that lawmakers had been prevented "from interacting with special guests" during the ceremony.

"This is a cultural rather than a political problem. Every one of those esteemed MPs in that selfie should be interviewed seriously," cultural adviser to the president, Hesam Ashena, said.

Ms. Mogherini has worked to build closer ties between the EU and Iran since her appointment to foreign affairs chief in November 2014. The Italian representative was praised for her role in the 2015 negotiations of the Joint Comprehensive Plan of Action, an international agreement on Iran's nuclear program.

While her office has released a statement about the visit to Iran, they have made no comment on the photo controversy.