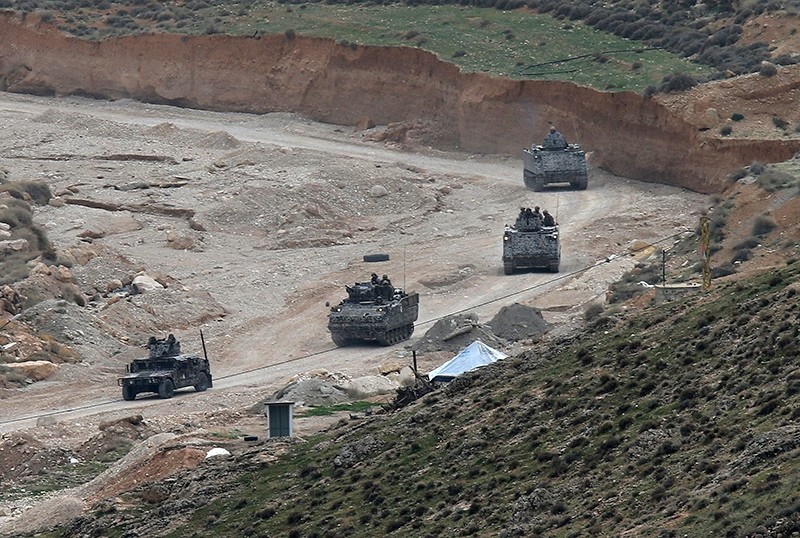 Lebanon's military backed by the U.S. is gearing up for a long-awaited assault to dislodge hundreds of Daesh terrorists from a remote corner near Syrian border, seeking to end a years-long threat posed to neighboring towns and villages by the extremists.

The campaign will involve cooperation with the militant group Hezbollah and the Syrian army on the other side of the border — although Lebanese authorities insist they are not coordinating with the Assad regime.

But the assault could prove costly for the under-equipped military and risk activating Daesh sleeper cells in the country.

The tiny Mediterranean nation has been spared the wars and chaos that engulfed several countries in the region since the Arab Spring uprisings erupted in 2011. But it has not been able to evade threats to its security, including sectarian infighting and random car bombings, particularly in 2014, when militants linked to al-Qaida and Daesh overran the border region, kidnapping Lebanese soldiers.

The years-long presence of extremists in the border area has brought suffering to neighboring towns and villages, from shelling, to kidnappings of villagers for ransom. Car bombs made in the area and sent to other parts of the country, including the Lebanese capital, Beirut, have killed scores of citizens.

Aided directly by the United States and Britain, the army has accumulated steady successes against the militants in the past year, slowly clawing back territory, including strategic hills retaken in the past week. Authorities say it's time for an all-out assault.

The planned operation follows a six-day military offensive by the Lebanese Shiite militant group Hezbollah that forced al-Qaida-linked fighters to flee the area on the outskirts of the town of Arsal, along with thousands of civilians.

In a clear distribution of roles, the army is now expected to launch the attack on Daesh. In the past few days, the army's artillery shells and multiple rocket launchers have been pounding the mountainous areas on the Lebanon-Syria border where Daesh held positions, in preparation for the offensive. Drones could be heard around the clock and residents of the eastern Bekaa Valley reported seeing army reinforcements arriving daily in the northeastern district of Hermel to join the battle.

The offensive from the Lebanese side of the border will be carried out by the Lebanese army, while Syrian troops and Hezbollah fighters will be working to clear the Syrian side of Daesh militants. Hezbollah has been fighting alongside Assad regime forces since 2013.

Experts say more than 3,000 troops, including elite special forces, are in the northeastern corner of Lebanon to take part in the offensive. The army will likely use weapons it received from the United States, including Cessna aircraft that discharge Hellfire missiles.

Keen to support the army rather than the better equipped Iranian-backed Hezbollah, the U.S. and Britain have supplied the military with helicopters, anti-tank missiles, artillery and radars, as well as training. The American Embassy says the U.S. has provided Lebanon with over $1.4 billion in security assistance since 2005.

But the fight is not expected to be quick or easy.

According to Lebanon's Interior Minister Nouhad Machnouk, there are about 400 Daesh fighters in the Lebanese area, and hundreds more on the Syrian side of the border.

"It is not going to be a picnic," said Hisham Jaber, a retired army general who heads the Middle East Center for Studies and Political Research in Beirut. "The Lebanese army will try to carry out the mission with the least possible losses."

Jaber said the battle may last several weeks. "It is a rugged area and [Daesh] is well armed and experienced."

There are also concerns the offensive may subject Lebanon to retaliatory attacks by militants, just as the country has started to enjoy a rebound in tourism.

A Lebanese security official said authorities are taking strict security measures to prevent any attack deep inside Lebanon by sleeper cells. The official, who spoke on condition of anonymity in line with regulations, said authorities have detained several Daesh militants over the past weeks.

The area stretches from the badlands of the Lebanese town of Arsal and Christian villages of Ras Baalbek and Qaa, to the outskirts of Syria's Qalamoun region and parts of the western Syrian town of Qusair that Hezbollah captured in 2013.

"Opening two fronts at the same time will speed up victory and reduce losses," Nasrallah said, adding that his fighters on the Lebanese side of the border are at the disposal of Lebanese troops if needed.

"I tell Daesh that the Lebanese and Syrians will attack you from all sides and you will not be able to resist and will be defeated," he said, using an Arabic acronym for the extremist group.

"If you decide to fight, you will end up either a prisoner or dead," Nasrallah added.

Some Lebanese politicians have been opposed to security coordination with the Syrian army. The Lebanese are sharply divided over Syria's civil war that has spilled to the tiny country of 4.5 million people. Lebanon is hosting some 1.2 million Syrian refugees.

Prime Minister Saad Hariri is opposed to Assad while his national unity Cabinet includes Hezbollah as well as other groups allied with the regime.

Last week, Hariri told reporters that Lebanese authorities are ready to negotiate to discover the fate of nine Lebanese soldiers who were captured during the raid on Arsal by Daesh and al-Qaida fighters in August 2014. Unlike their rivals in al-Qaida, the Daesh group is not known to negotiate prisoner exchanges.

"The presence of Daesh will end in Lebanon," Hariri said.