French foreign and defense ministers in Iraq to discuss Daesh 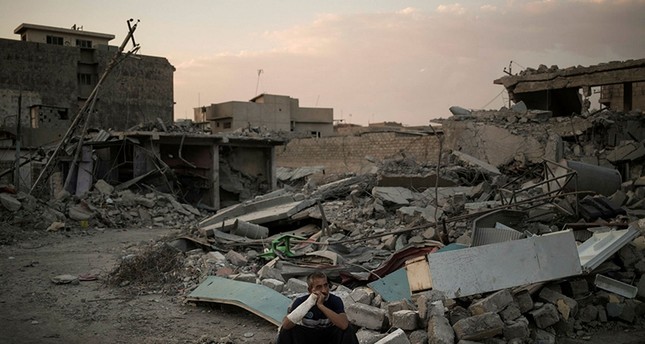 Le Drian and Parly will discuss with Iraqi leaders the war on Daesh terrorist group, the stabilization of cities destroyed in the conflict and assistance to refugees, according to diplomats.

France is a main partner in the U.S.-led coalition helping Baghdad fight the militants who seized parts of Iraq and Syria in 2014.

Their visit comes as Iraqi forces battle to seize the northern city of Tal Afar from Daesh following their July victory over the group in second city Mosul.

Speaking on the plane to Baghdad, Le Drian said Iraq faced the dual challenge of "a war that is coming to an end and the beginning of the stabilization and reconstruction of the country," AFP reported.

The ministers will also meet Iraqi Kurdish leader Massud Barzani in Irbil, where they are to echo calls by Pentagon chief Jim Mattis for the postponement of next month's independence referendum.

France is a key member of a coalition backing Iraqi forces in their campaign to retake vast tracts of Iraq that the jihadists grabbed in a 2014 offensive.

French forces have carried out air and artillery strikes in support of Iraqi operations.

"As long as our common enemy has not been eradicated, France will continue to take part" in the campaign, Parly said.

France, which refused to take part in the 2003 American-led invasion that brought down dictator Saddam Hussein, is keen to participate in the reconstruction of Iraq.

The cost of reconstruction has been estimated at between $700 billion and $1 trillion (590 to 840 billion euros).

The ministers are also set to discuss the fate of a small number of French terrorists captured by Iraqi forces, according to a French diplomatic source.

Paris says up to 700 French nationals are fighting for Daesh in Syria and Iraq, where around 300 French terrorists have been killed since 2014.

Share on Facebook Share on Twitter
Previous in MidEast After being elected as U.S. president, Donald Trump said Egypt is... Next in MidEast Iraqi forces battling to drive the Daesh terror group from Tal Afar...
DAILY SABAH RECOMMENDS