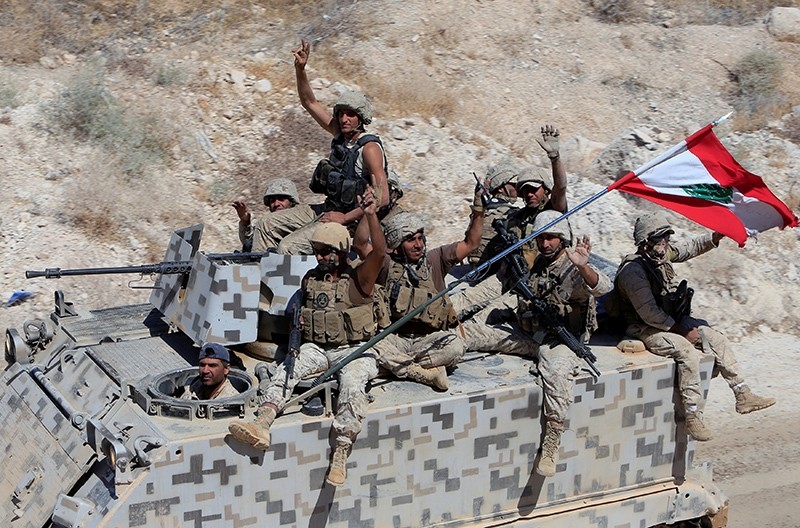 Lebanon's army on Sunday announced a pause in its offensive against Daesh terrorist group along the border with Syria to allow for negotiations on troops taken hostage in 2014.

The armed forces launched their campaign against Daesh militants entrenched in the mountainous Jurud Ras Baalbek and Jurud al-Qaa areas on Lebanon's eastern border on August 19.

"The army command announces a ceasefire beginning at 7:00 am (0400 GMT) to make way for the last phase of negotiations linked to the fate of the kidnapped soldiers," it said in a statement on Sunday.

Nine troops are believed to still be held by Daesh after militants overran the Lebanese border town of Arsal in August 2014 and kidnapped 30 soldiers and police.

Four were killed by their captors and a fifth died of his wounds, while 16 were released in a prisoner swap in December 2015.

The army has said the remaining missing troops were its "top concern" in its offensive against an estimated 600 Daesh fighters in the hilly border region.

"There has been no timeframe set" for the truce, an army source told AFP.

"The negotiations are ongoing for Daesh to withdraw and provide information on the fate of the troops," the source added.

Six Lebanese army troops have been killed since August 19.

Lebanese militant group Hezbollah launched its own simultaneous attack against Daesh from the Syrian side of the border in an area known as west Qalamun.

It said the unilateral pause was "in the framework of a comprehensive agreement to end the battle in west Qalamun against Daesh."

Lebanon's army insisted it was not coordinating its assault with Hezbollah.

The nine Lebanese soldiers have been missing since August 2014, when Daesh and then Al-Qaeda affiliate Al-Nusra Front briefly overran Arsal, a town on Lebanon's restive eastern border with Syria.

The groups withdrew under a truce deal, but took 30 hostages from Lebanon's security forces with them.

Al-Nusra and Daesh each executed two of their hostages, and a fifth died of wounds sustained during the fighting in Arsal.

After months of fraught negotiations, Al-Nusra handed over 16 of the soldiers and police in December 2015 in exchange for the release of prisoners from Lebanese jails and delivery of aid.

He is also expected to be behind negotiation efforts for the nine soldiers still in Daesh hands.

The army's operation comes after Hezbollah carried out its own six-day campaign in July further south on the border area against what is now Al-Qaeda's former affiliate, after Al-Nusra broke off ties with the extremist group last year.

That offensive ended with a ceasefire under which 8,000 refugees and fighters were transported to northwestern Syria in return for the release of five captured Hezbollah fighters.