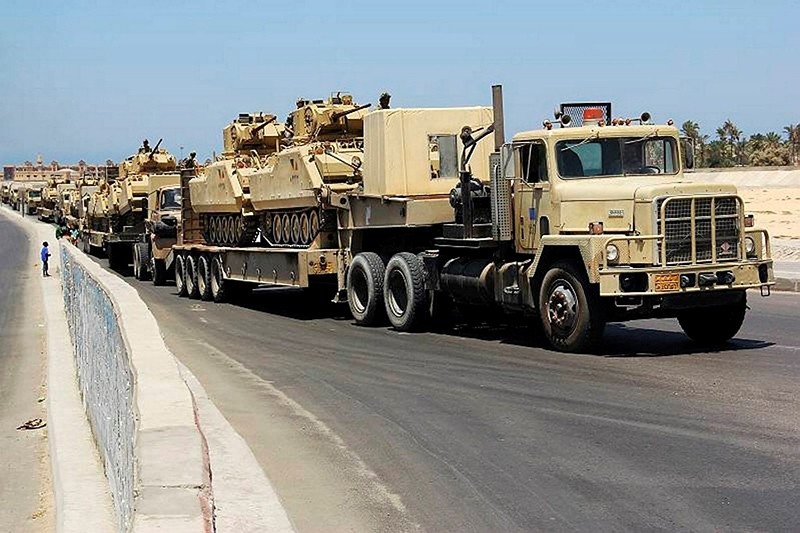 Suspected militants Monday ambushed a police convoy in Egypt's Sinai Peninsula, killing 18 policemen and wounding several others, including a police brigadier-general, according to security and military officials.

The police and military officials said the attack began with the detonation of roadside bombs that destroyed and set ablaze three armored vehicles and a fourth one carrying signal jamming equipment. The gunmen later opened fire with machine guns and commandeered a police pickup truck.

The attack took place about 30 kilometers (20 miles) west of el-Arish in northern Sinai, the epicenter of a long-running insurgency by militants now led by the Daesh terrorist group.

Daesh claimed responsibility for the attack, saying it killed eight Egyptian soldiers in an ambush on the outskirts of El-Arish, according to the Aamaq news agency, which is affiliated to the terrorist group.

"As the forces dealt with the car, it blew up," the interior ministry said.

The explosion was followed by a shootout with "militant elements who were hiding in the desert area alongside the road," the ministry said.

"This led to the martyrdom of some of the convoy's individuals and the injury of others," it said.

Egyptian security forces killed 10 suspected militants Sunday in a shootout during a raid on two apartments in central Cairo.

A statement by the Interior Ministry, which oversees security forces, said the militants were hiding in two apartments in the densely populated Ard el-Liwa neighborhood, where they held organizational meetings and planned a "series of terror attacks" in central provinces, a reference to Cairo and its twin city of Giza.

The presence of a cell of as many as 10 militants in a Cairo district not far from the heart of the city points to a determined effort by Daesh and other militant groups to stage deadly and potentially high-profile attacks in the national capital, which would shatter a fragile but relative sense of security in a city of some 20 million people.