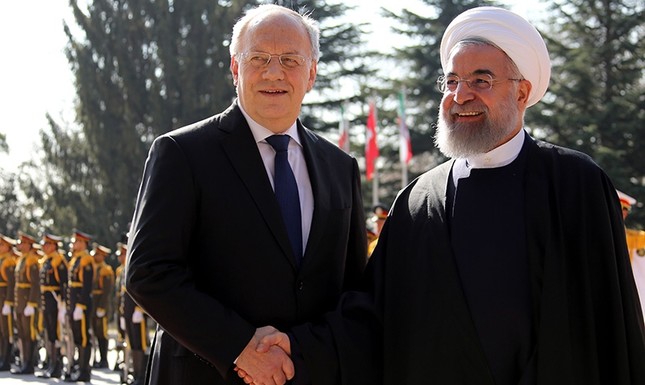 The Swiss government Wednesday finalized agreements to act as a go-between for Iran and Saudi Arabia, more than 20 months after the two Middle Eastern powers broke off diplomatic ties.

Switzerland's executive body, the Federal Council, "gave the green light" to providing a "protecting power mandate" between the two countries, the Swiss government said in a statement. The arrangement was quickly formalized separately in Riyadh and Tehran.

The arrangement only involves consular services, such as helping Iranians who travel to Saudi Arabia for religious events, a Swiss diplomatic official said. For example, the Iranian consulate in the Saudi city of Jiddah will reopen under a Swiss flag, the official said. It will operate under supervision from the Swiss Embassy in Riyadh.

Saudi Arabia and Iran broke off diplomatic ties in January 2016 after Saudi Arabia executed a leading Shiite cleric, prompting protesters in Iran to attack the Saudi Embassy in Tehran.

The diplomatic gulf between the two countries has only appeared to grow since then. A Saudi-led coalition is at war with Iranian-supported rebels in Yemen, and Iran has sided with Qatar in its dispute with Saudi Arabia and other Arab nations.

Switzerland, a proudly neutral Alpine country, has often played the role of go-between for countries at odds with one another, such as between the United States and Cuba, and the United States and Iran.
Share on Facebook Share on Twitter
Previous in MidEast Israeli authorities approved on Wednesday a major expansion of a Jewish... Next in MidEast Kuwait's ruler cautions the crisis between a quartet of Arab countries...
DAILY SABAH RECOMMENDS