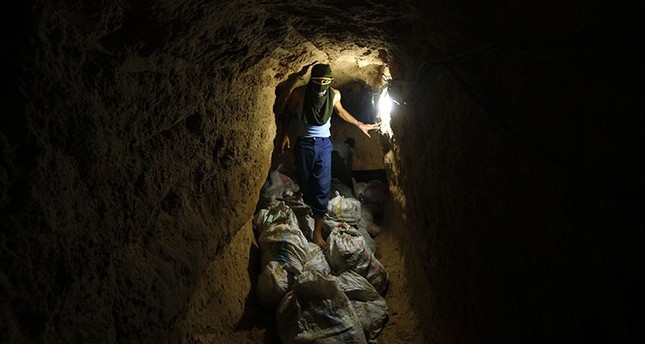 Eight Palestinians were killed Monday as Israel blew up what it said was a tunnel stretching from the Gaza Strip into its territory, a rare case of such an incident since a devastating 2014 assault.

Ashraf al-Qudra, spokesman for the Hamas-led Gazan health ministry, confirmed seven men had been killed, with a further 12 injured.

Two came from Hamas' armed wing, the Ezzedine al-Qassam Brigades, while the other five were from a Hamas-allied armed group, the two groups confirmed.

The Israeli army "neutralized a terror tunnel leading into southern Israel from the vicinity of Khan Younis," military spokesman Jonathan Conricus told journalists, referring to a city in the southern Gaza Strip.

"The tunnel was detonated from within Israel, close to the security fence. The [Israeli army] actions are in light of this grave and unacceptable violation of Israeli sovereignty."

He said the Israeli military was not seeking a further escalation, however.

Conricus said the tunnel was targeted around two kilometres from the Israeli village of Kissufim, but added that no Israelis had been in danger.

He could not confirm whether the tunnel belonged to Hamas, which runs the Gaza Strip, but said Israel nevertheless holds the group responsible for all such activity from the Palestinian enclave.

In April 2016, Israel's military said it had located and destroyed a tunnel extending from the Gaza Strip into Israeli territory in the first such discovery since the devastating 2014 conflict.

Hamas forces have used tunnels in the past to enter Israel and carry out attacks.