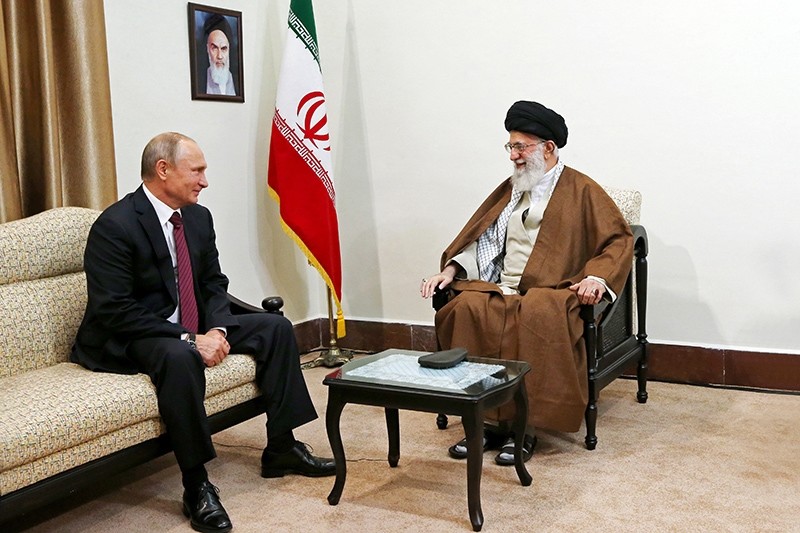 In this picture released by the office of the Iranian supreme leader, Supreme Leader Ayatollah Ali Khamenei, right, speaks with Russian President Vladimir Putin during their meeting in Tehran, Iran, Wednesday, Nov. 1, 2017 (AP Photo)
by Nov 01, 2017 12:00 am

Russian President Putin attended a trilateral summit in Tehran with the leaders of Iran and Azerbaijan, signaling a move to increase regional cooperation against the U.S. presence in the region

Russian President Vladimir Putin arrived in Iran on Wednesday for trilateral talks with Tehran and Azerbaijan, a meeting that comes as Iran's nuclear deal is threatened by U.S. President Donald Trump's refusal to recertify the accord. It is Putin's third visit to Iran after previously making trips in November 2015 and in 2007.

The trilateral meetings in Tehran focused on regional matters as well as terrorism and security. The three countries all share the Caspian Sea and railway and road projects were discussed at their meeting, as well. In terms of economics, the Tehran meeting primarily looked at new avenues of trade, Rahimpur told Iran's ISNA news agency. Iran could gain access to European markets via the Black Sea while Russia and Azerbaijan could reach Arab markets through the Gulf. The three countries are key producers in international oil and gas markets as they share the continental shelf of the oil-rich Caspian Sea.

The two countries have many mutual interests in the region. Russia and Iran have both backed Bashar Assad in Syria's long civil war.

Russia also has helped Iran's nuclear power program, taking part in construction of two nuclear power reactors in the southern port city of Bushehr, home of the first Iran's nuclear power plant that went online in 2011 with Moscow's assistance. The project is estimated to cost some $8.5 billion, with each reactor producing 1,057 megawatts of electricity.

Moscow has stood by Tehran as well while Trump has refused to re-certify the nuclear deal between Iran and world powers, including Russia. The other parties to the accord – Britain, China, France, Germany and the European Union – also have all urged Trump to stay in the deal.

Trump said on Oct. 13 that he would not certify that Iran is complying with an international agreement on its nuclear program and threatened that he might ultimately terminate the accord. Trump's action opened a 60-day window for Congress to act to re-impose sanctions on Iran's nuclear program that were lifted under the agreement, but there has been no move to do so in the House or Senate.