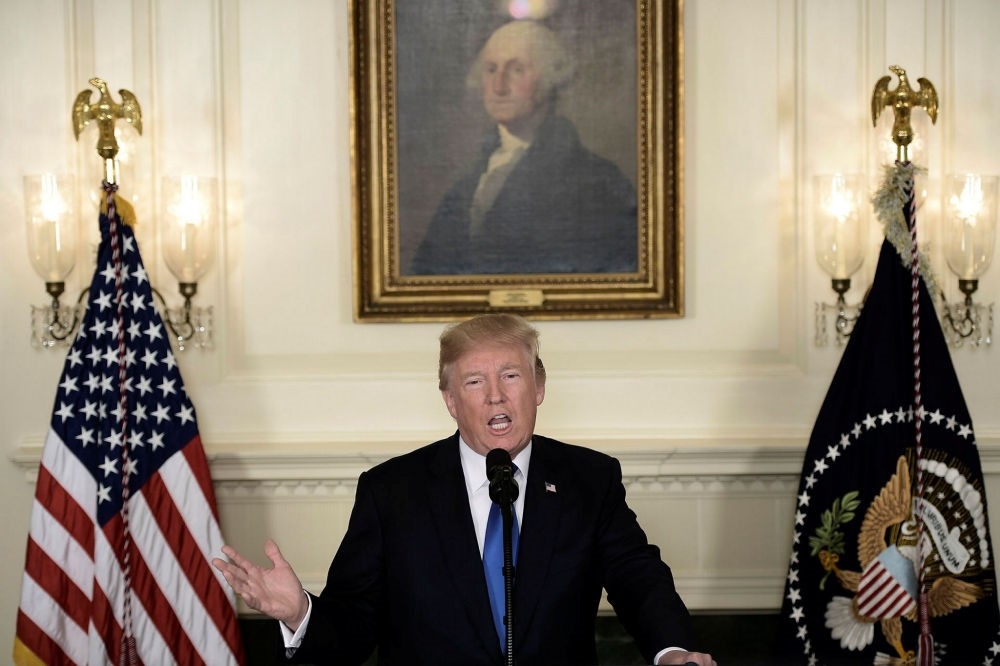 U.S. President Trump speaks about the Iran deal from the Diplomatic Reception room of the White House, Washington, Oct.13.
by Compiled from Wire Services
Nov 08, 2017 12:00 am

U.S. President Trump is extending the national emergency with Iran while praising the Saudi palace purge and voicing confidence in the king and crown prince

U.S. President Donald Trump notified Congress on Monday that he was extending the national emergency with Iran that has been in place since the 1979 hostage crisis.

"Our relations with Iran have not yet normalized, and the process of implementing the agreements with Iran, dated Jan. 19, 1981, is ongoing," Trump wrote Congress in the formal notice, as reported by the Washington Times.

Last month, President Donald Trump said on Oct. 13 he would not certify whether Iran is complying with an international agreement on its nuclear program, and threatened that he might ultimately terminate the accord. Trump's action opened a 60-day window for Congress to act to re-impose sanctions on Iran's nuclear program that were lifted under the agreement, but there has been no move to do so in the House or Senate.

The Trump administration has vowed to confront Iran much more aggressively in the region, where it shares the Saudi view that Tehran is fomenting instability via a number of proxies in Lebanon, Syria and Yemen among other countries. Tehran denies the allegations.

The U.S.-Saudi ties had been strained under Obama, who Riyadh felt considered their alliance less important than negotiating the Iran nuclear deal. The U.S. and Saudi Arabia have historically enjoyed close ties, which Trump re-affirmed in May when he visited the country in his first foreign trip since taking office. Washington and Riyadh announced contracts worth more than $380 billion, including a $110-billion arms deal aimed at countering perceived threats from Iran and militants.

Trump on Monday endorsed a move by Saudi Arabia's future king that tightened his grip on power through the arrests of royals, ministers and investors in an anti-corruption purge.

The endorsement cemented a U.S.-Saudi relationship that has improved dramatically under Trump's presidency, partly because of both leaders' vision of confronting Riyadh's arch-rival Iran more aggressively in the region.

Events in Saudi Arabia in recent days appeared to open the prospect for a sharper confrontation with Iran and its proxies. Saudi Arabia accused Lebanon on Monday of declaring war against it because of what it called aggression by the Iran-backed Lebanese Shiite group Hezbollah. Saudi-allied Lebanese politician Saad al-Hariri quit as prime minister on Saturday, announcing his resignation from Riyadh and blaming Iran and Hezbollah in his resignation speech.

The Pentagon praised Saudi Arabia for "exposing" Iran's role in Yemen and Tehran's provision of missile systems to Houthi militia fighting there.

Saudi Arabia's powerful crown prince accused Iran yesterday of "direct military aggression" through Yemen's Houthi rebels, ratcheting up regional tensions. Tehran vehemently denied the charge and in turn accused Riyadh of war crimes in Yemen. Sunni-ruled Saudi Arabia and predominantly Shiite Iran have been trading fierce accusations over their involvement in the conflict in Yemen, in which they back opposing sides.