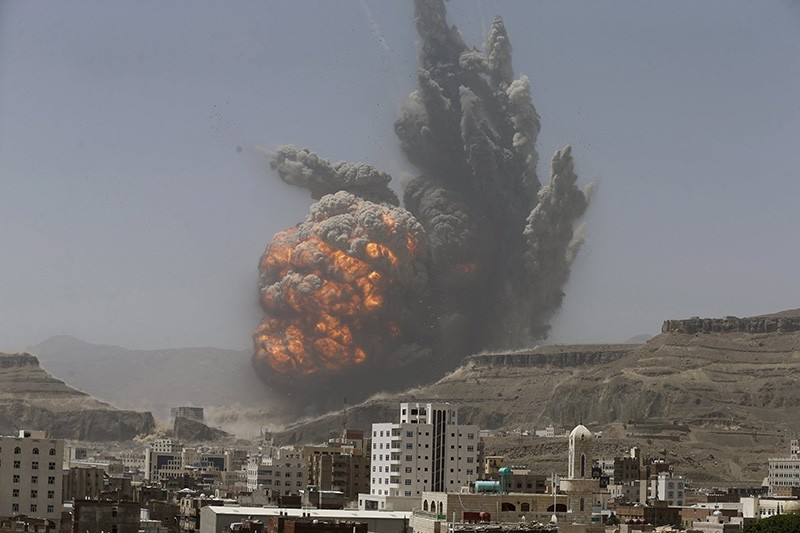 Warplanes continued to circle in the skies above Sanaa after the strikes, the witnesses added.

According to witnesses, at least three civilians were wounded in the airstrikes, which hit a residential area near the ministry of defense building, which had been targeted just before.

"I was sitting at home and heard the first strike hit the ministry of defense. Everyone was afraid. Minutes later, another strike hit my neighbor's house," resident Mohammed Aatif said

The coalition has targeted the defense ministry in the past, leaving it heavily damaged, but the fresh strikes come amid a ratcheting up of tensions between Saudi Arabia and its rival Iran, which backs the Houthi rebels.

The coalition shut down Yemen's borders earlier this week after Saudi forces on Saturday intercepted a ballistic missile fired by the Houthis near the Riyadh airport.

The rebels have threatened additional attacks on Saudi Arabia and its coalition partner the United Arab Emirates in response to the blockade.

The United Nations said on Friday that the coalition is still blocking desperately needed UN aid deliveries to Yemen despite the re-opening of the Yemeni port of Aden and also a land border crossing.

This week, U.N. aid chief Mark Lowcock warned the Security Council that, unless the blockade was lifted, Yemen would face "the largest famine the world has seen for many decades, with millions of victims".

The world body has listed Yemen as the world's number one humanitarian crisis, with 17 million people in need of food, seven million of whom are at risk of famine.

More than 2,000 Yemenis have died in a cholera outbreak now affecting nearly one million people.

Saudi Arabia and its allies intervened in neighboring Yemen in March 2015 with the stated aim of rolling back Houthi rebel gains and restoring the government of President Abedrabbo Mansour Hadi to power.

The Houthis continue to control the capital Sanaa and much of Yemen's north.

The conflict has left more than 8,650 people dead, including many civilians.