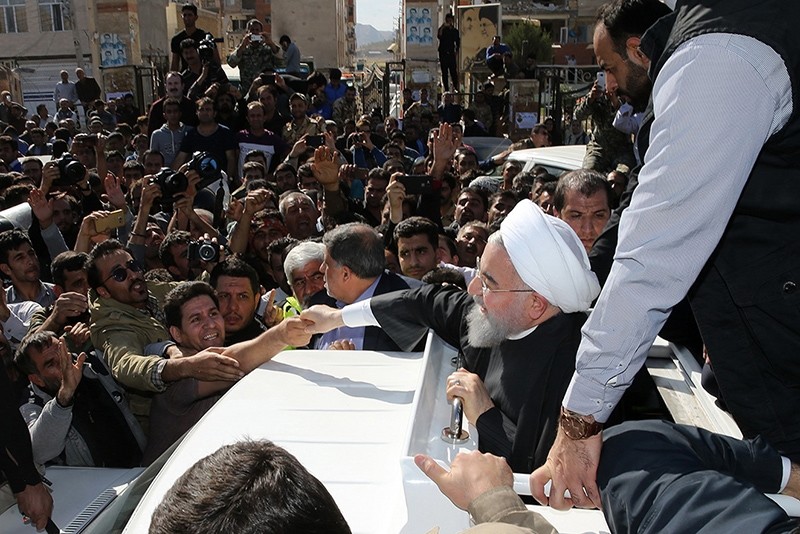 A handout photo provided by the office of Iranian President Hassan Rouhani shows him (C) during visit to the earthquake-hit area of Sarpol-e Zahab, Kermanshah province, Iran, Nov. 14, 2017. (via AFP)
by Compiled from Wire Services Nov 14, 2017 12:00 am

Iranian President Hassan Rouhani said Tuesday his administration will probe the cause of so much damage to buildings constructed under a state-owned program in the quake-stricken area along the border with Iraq.

The official IRNA news agency said Rouhani made the remarks while touring the quake-hit Iranian Kurdish town of Sarpol-e Zahab on Tuesday.

According to the report, Rouhani said that "the faults and shortcomings in the construction of these buildings should be investigated."

He pledged the "government will definitely follow up on these issues and identify the culprits."

Many of the damaged buildings were built during former hard-line President Mahmoud Ahmadinejad administration, though some of them were completed and handed over to the residents under Rouhani.

Under the plan dubbed Mehr, or "kindness" in Farsi, some 2 million units were built in Iran, including hundreds in Sarpol-e Zahab. Many warned that the low-quality construction could be problematic.

Meanwhile, IRNA also reported that death toll from the magnitude 7.3 earthquake that struck the Iran-Iraq border has risen to 530, and the number of injured in the temblor now stood at 7,460.

Rouhani also promised swift help to those affected by the powerful earthquake.

"I want to assure those who are suffering that the government has begun to act with all means at its disposal and is scrambling to resolve this problem as quickly as possible," he said.

Rouhani said all aid would be channelled through the Housing Foundation, one of the charitable trusts set up after the Islamic revolution of 1979 that are major players in the Iranian economy.