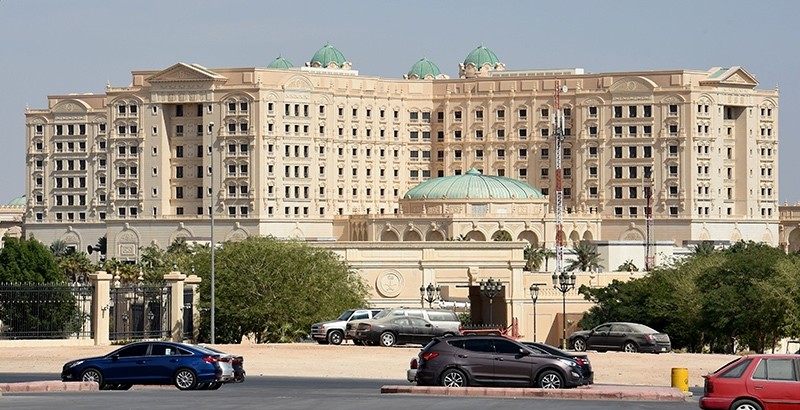 A general view of a Ritz Karlton hotel, the site rumoured to host the people detained in Saudi anti-corruption purge, Riyadh, Saudi Arabia, Nov. 5, 2017. (AFP Photo)
by Compiled from Wire Services Nov 17, 2017 12:00 am

Saudi authorities are striking agreements with some of those detained in an anti-corruption crackdown, asking them to hand over assets and cash in return for their freedom, sources familiar with the matter said.

The deals involve separating cash from assets like property and shares, and looking at bank accounts to assess cash values, one of the sources told Reuters.

One businessman had tens of millions of Saudi riyals withdrawn from his account after he signed. In another case, a former senior official consented to hand over ownership of four billion riyals worth of shares, the source said.

The Saudi government earlier this week moved from freezing accounts to issuing instructions for "expropriation of unencumbered assets" or seizure of assets, said a second source familiar with the situation.

There was no immediate comment from the Saudi government on the deals.

Saudi Arabia detained hundreds as part of an unprecedented purge of the kingdom's elite. Princes, ministers and a billionaire business tycoon were among dozens of high-profile figures arrested or sacked at the weekend.

The purge, described by Saudi Arabia as an anti-corruption operation, is conducted by the newly formed anti-corruption committee headed by Crown Prince Mohammed bin Salman.