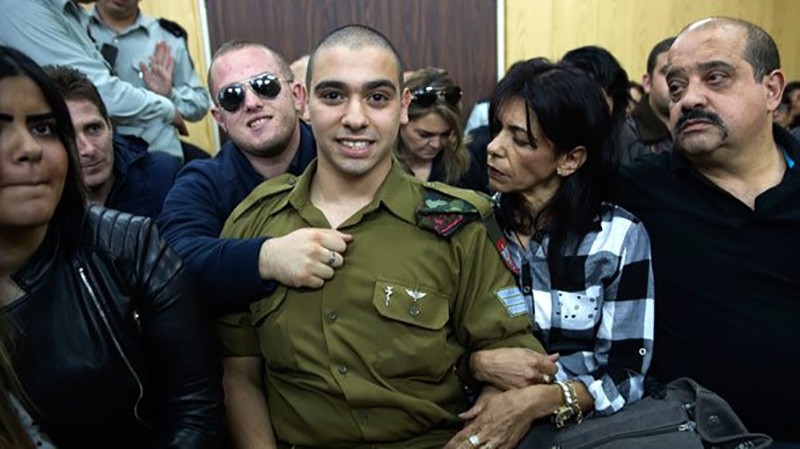 On Nov. 19, Israel's President Reuven Rivlin's turned down a pardon request for Elor Azaria, who is serving a 14-month jail term for killing an incapacitated Palestinian assailant. (Sabah File Photo)
by Nov 19, 2017 12:00 am

Israel's president Sunday turned down a pardon request by an ex-conscript who is serving a 14-month jail term for killing an incapacitated Palestinian assailant.

In September, Israel's military reduced by four months the 18-month jail term of Elor Azaria who was caught on videotape shooting dead a Palestinian who was lying wounded after taking part in a stabbing attack on other Israeli soldiers in the occupied West Bank city of Hebron in March 2015.

A statement issued by President Reuven Rivlin's office said that he had reviewed the plea and after Azaria had already received reductions to his sentence, it would not be right to grant a pardon.

"The president believes ... that an additional reduction in punishment would undermine the strength of the military, its values, and of the state of Israel," part of the statement read.

It added that the president understood that Azaria was due to face a parole board shortly and could be released in three months' time.

Azaria became a right-wing cause hero in Israel, where most Jewish men and women are drafted at 18 for military service. One poll found that nearly half of Israeli Jews believe any Palestinian attacker should be killed on the spot.

Azaria said he shot Abd Elfatah Ashareef because he feared the Palestinian could carry out another attack, but a court-martial found contradictions in the testimony and convicted him of manslaughter. The verdict was upheld on appeal.

"President Rivlin had an opportunity to end an affair that has rocked Israeli society," Lieberman wrote.

"Beyond the price that the soldier and his family have paid ... I believe ... that [there is a need] to heal the rifts in society ... we must not forget that this was a case of [Azaria], an exemplary soldier [facing] a terrorist who came to kill."

After being discharged from the military, Azaria went to prison in August and appealed to the armed forces chief, Lieutenant-General Gadi Eizenkot, to reconsider his sentence, citing the cost to his family of the acrimonious trial.

In a response letter, the military informed Azaria that Eizenkot had decided to cut the jail term "on grounds of compassion and mercy ... taking into account your past as a combat soldier in an operational theater."

The Palestinian government said Azaria's jail term had given Israeli soldiers a "green light" to kill with impunity. Under Israeli law, manslaughter can carry a maximum 20 years behind bars. Military prosecutors had asked the appeals court to impose a three- to five-year sentence on Azaria, but were turned down.