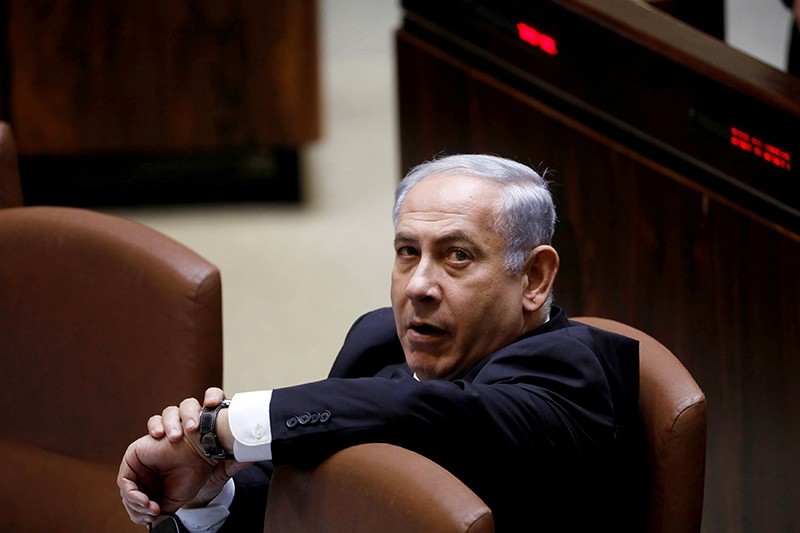 Israeli Prime Minister Benjamin Netanyahu attends a session of the Knesset, the Israeli parliament, in Jerusalem. (Reuters Photo)
by Nov 19, 2017 12:00 am

Israel's Prime Minister Benjamin Netanyahu is set to be questioned by police Sunday for the second time this month over two alleged cases of corruption.

Netanyahu is suspected of having received luxury gifts from wealthy supporters, including Israeli businessman and Hollywood producer Arnon Milchan.

Milchan, a longtime friend of Netanyahu who reportedly sent him boxes of expensive cigars and other items worth tens of thousands of dollars, was himself questioned in September.

Sunday's questioning would be the sixth time Netanyahu has faced police investigators in recent months.

Investigators have also questioned the premier on suspicions he sought a secret deal for favorable coverage with the publisher of the top-selling Yediot Aharonot newspaper.

The alleged deal, not believed to have been finalized, would have seen Netanyahu receive positive coverage in return for helping curb Yediot's competitor, the pro-Netanyahu freesheet Israel Hayom.

Police would not confirm the reports of the latest questioning, which was widely reported in the Israeli media on Sunday.

Earlier this month, Netanyahu confidants Yitzhak Molcho and David Shimron, partners in a law firm and both relatives of the premier, were questioned by police as part of a probe into suspected corruption around the purchase of German submarines.

Netanyahu himself has not been named as a suspect in the submarine case, but reports said he might give testimony into the affair Sunday.