Palestinians warn US over plans to relocate its embassy to Jerusalem 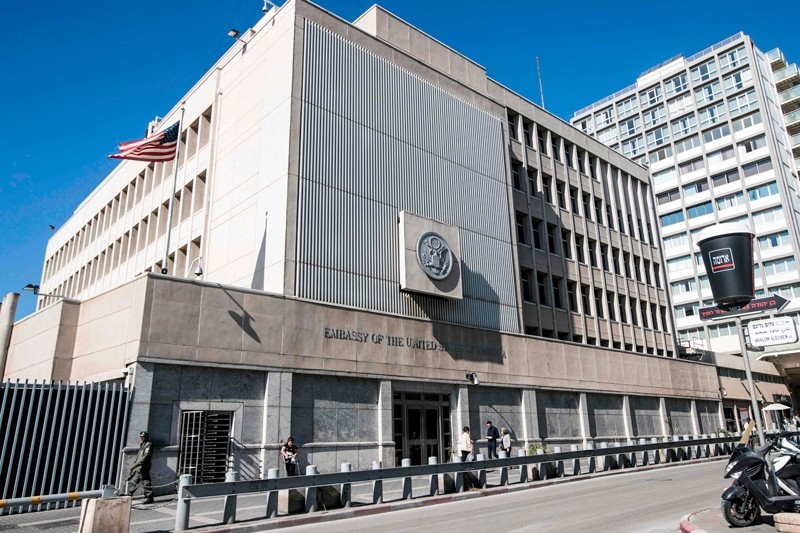 This file photo shows the exterior of the US Embassy building in the Israeli coastal city of Tel Aviv ( AFP File Photo)
by Daily Sabah with Agencies Dec 02, 2017 12:00 am

Speaking in Abbas' presence, Habash said "the world will pay the price" for any change in Jerusalem's status.

This "would represent a U.S. assault on the city and give legitimacy to [Israel] over the city," Hamas said in a statement on Saturday.

Hamas said such a U.S. move "would give a cover to Israel to pursue the judaization of Jerusalem and expulsion of the Palestinians from the city", going on to call on Arab and Islamic nations to work to halt the expected U.S. decision.

"President Erdoğan reiterated the importance of the establishment of an independent, sovereign Palestinian State with east Jerusalem as its capital and the preservation of the status of Jerusalem & Haram al-Sharif for peace and security" Presidential Spokesperson İbrahim Kalın said.

Officials in Washington say Trump is considering recognizing Jerusalem as Israel's capital as a way to offset his likely decision to delay his campaign promise of moving the U.S. embassy there.

Israel regards Jerusalem as its capital, a position nearly the entire world rejects saying its status should be determined in peace talks with the Palestinians. The Palestinians claim the eastern part of the city as their future capital.

Jerusalem remains at the core of the perennial Israel-Palestine conflict, as Palestinians want Israeli-occupied East Jerusalem as the capital of a future state
Last Update: Dec 03, 2017 12:36 am
RELATED TOPICS