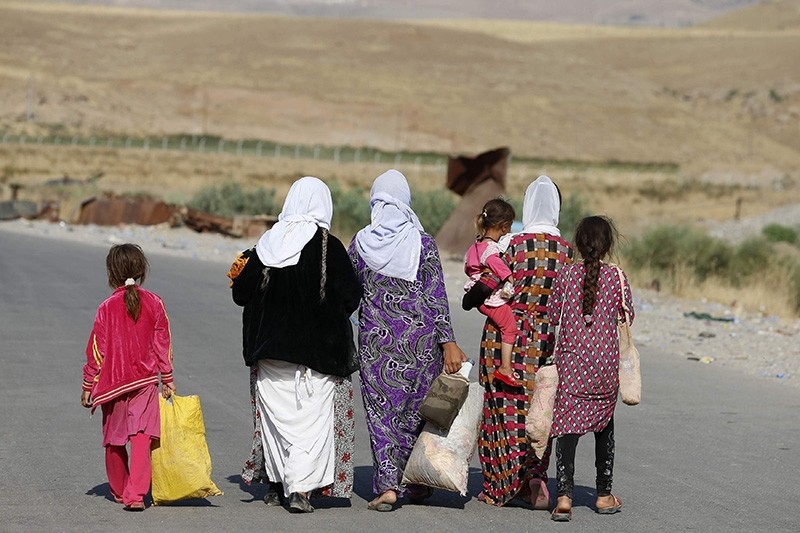 Around half of the Yazidis kidnapped by the Daesh terror group three years ago are still missing, Iraqi Kurdish officials said Sunday.

In 2014, Daesh militants killed thousands of Yazidis in Sinjar and kidnapped thousands of women and girls from the religious minority to abuse them as sex slaves.

Kurdish fighters backed by the U.S.-led coalition against Daesh captured Sinjar from the militants in November 2015 before Iraqi security forces took control of the region in October.

A top official with the ministry of religious affairs of the autonomous Kurdish region of northern Iraq said that some 6,417 Yazidis were abducted by Daesh from Aug. 3, 2014.

The remaining 3,210 Yazidis -- including 1,507 women or girls -- were still either held by the militants or considered missing, he told AFP.

The ministry has been following up on the case and its figures show that 2,525 Yazidi children are now orphans while the parents of 220 others were still unaccounted for.

According to Bozani 47 mass graves containing the remains of Yazidis have been found since 2014.

The U.N. has called the massacres of Yazidis a genocide, arguing that Daesh had planned them and then intentionally separated men from women to prevent Yazidi children from being born.

The Yazidis are Kurdish-speaking but follow their own non-Muslim faith that earned them the hatred of the Daesh terrorists.

Yazidis believe in one God who created the world and entrusted it to seven Holy Beings, the most important of which is Melek Taus, or the Peacock Angel.

Around 550,000 Yazidis lived in Iraq before the massacres but since then 100,000 have left the country while 360,000 have been displaced and live in Iraqi Kurdistan or across the border in Syria.