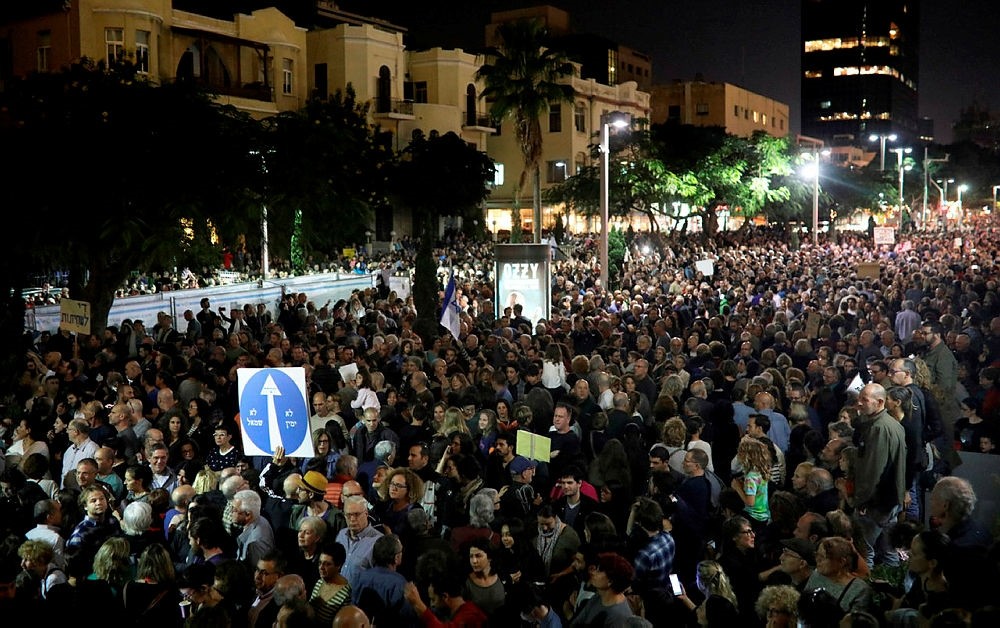 Israelis take part in a demonstration under the name ,March of Shame, to protest against government corruption and Prime Minister Benjamin Netanyahu in Tel Aviv, Israel, Dec. 2, 2017. (AFP Photo)
by Compiled from Wire Services Dec 03, 2017 12:00 am

Tens of thousands of Israelis took part in a demonstration in Tel Aviv on Saturday evening against government corruption and Prime Minister Benjamin Netanyahu.

The "March of Shame" was also directed against a draft bill that could limit police powers by prohibiting officers from making recommendations to prosecute after investigations, Israeli daily Haaretz reported.

Critics says the bill, which will come up for a second reading on Monday, is intended to protect Netanyahu from police investigations.

Netanyahu is suspected of receiving luxury gifts from wealthy supporters and has also faced police questioning over a secret deal he allegedly sought for favorable coverage with the publisher of top-selling Israeli daily Yediot Aharonot.

Protesters late Saturday massed in a large boulevard of an upmarket neighborhood in the Israeli city, a French Press Agency (AFP) reporter said, shouting "Shame" and "Bibi go home", referring to the prime minister by his nickname.

The rally — dubbed "the March of shame" — was organized by the leaders of weekly protests which have taken place outside the home of Attorney General Avishai Mandelblit over the past few months.

"Bibi and his government are destroying the country. There's been enough corruption," said demonstrator Michal, a Tel Aviv resident who preferred not to give his full name.

Opposition leader Isaac Herzog expressed solidarity with the protesters, writing on Facebook that "the frustration ... stems from a feeling of injustice, revulsion against corruption and the moral objection to a law made to measure for one person".

Israel's parliament will on Monday give a second and third reading of a bill that Netanyahu's opponents say is designed to help him survive the police investigation.

The bill's sponsor, David Amsalem of Netanyahu's Likud party, said he sought only to protect the rights and reputation of suspects.

Netanyahu is suspected of having received luxury gifts from affluent individuals including Israeli businessman and Hollywood producer Arnon Milchan, who has also been questioned.

Milchan, a long-time friend of Netanyahu, reportedly sent him boxes of expensive cigars and other items worth tens of thousands of dollars.

In addition to suspicions that the gifts constituted bribery, the police also suspect that Netanyahu sought a secret pact — not believed to have been finalized — which would have seen him receive favorable coverage in return for helping curb Yediot's competitor, the pro-Netanyahu freesheet Israel Hayom.