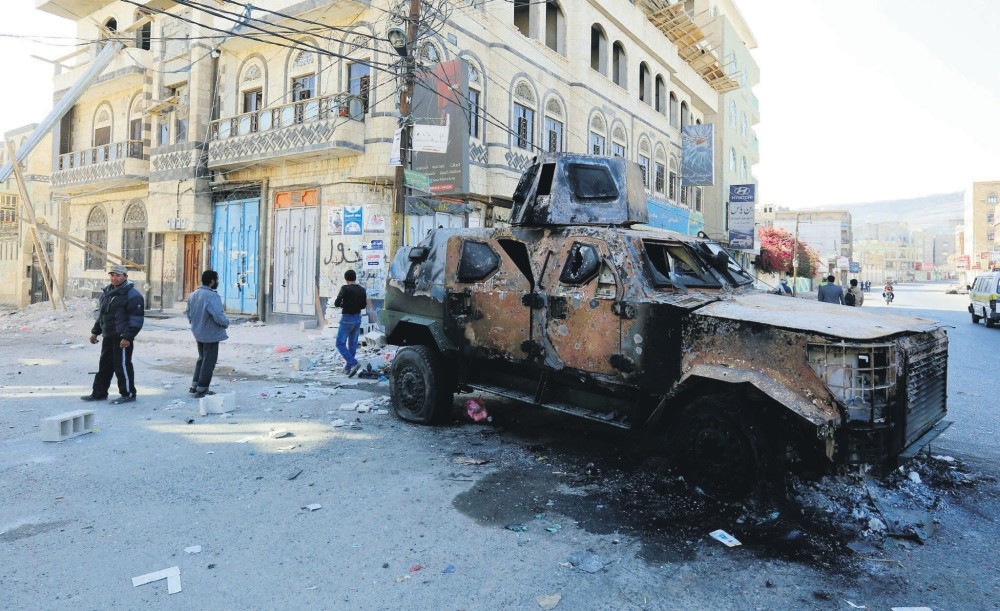 Yemenis walk past a destroyed armored personnel carrier in a street leading to the residence of Yemen's former president Ali Abdullah Saleh a day after Houthi militants killed him, Dec. 5.
by Yusuf Selman İnanç Dec 06, 2017 12:00 am

After Yemen's deposed leader Saleh was killed by his former allies, the ongoing developments may change the war's direction and leave already suffering civilians more defenseless

A video that quickly spread across social media on Monday, showing the death of Yemen's deposed leader Ali Abdullah Saleh, was verified as the forces loyal to the ex-president accepted that their leader was killed by the Iran-aligned Houthis. Prior to his death, Saleh had declared that he had abandoned the rebels and was ready to ally with Saudi Arabia, which has gone into a deadly war in the region's poorest country. His killing marked the end of an era for the country and for the fragile alliance between his forces and the Houthis. It was not expected that this alliance would last that long due to historical and political factors that placed the two parties at odds. Yet, they both benefited from each other as Saleh used the Houthis' manpower to re-establish his authority over the country and the Houthis benefited from Saleh's relations with local tribes and experiences.

Immediately after his death, many of the forces loyal to Saleh allegedly joined the Yemeni forces. Saleh's son declared he would take revenge for his father. Another report claimed that the Houthis killed at least 200 prisoners who were loyal to Saleh. These developments may change the course of the war.

Saudi-owned Al-Ekhbariya TV quoted Saleh's son Ahmed Ali as saying, "I will lead the battle until the last Houthi is thrown out of Yemen [...] the blood of my father will be hell ringing in the ears of Iran."

A Reuters report yesterday said, "Ahmed Ali has lived under house arrest in the United Arab Emirates, where he once served as ambassador before it joined ally Saudi Arabia to make war on the Houthis, who until this week had ruled much of Yemen together with Saleh. Political sources say he had been held incommunicado and under guard at a villa in the UAE capital, Abu Dhabi. His reported first public statement may indicate that his former enemies in the coalition are unleashing him against the Houthis. Ahmed Ali, the powerful former military commander of Yemen's elite Republican Guards, appeared to have been groomed to succeed his father, and he may be the family's last chance to win back influence."

Al-Arabiya channel claimed a "large number of Saleh's loyalists have joined Yemen's legitimate forces," after the leader was killed. The channels also said some certain tribes from the country's north called for revenge. However, the Associated Press (AP) said yesterday that Saleh's forces were in disarray and "it was not immediately clear if the Saudi-led coalition will be able to turn the split to its advantage in the war." Yet, "By Monday evening, hours after Saleh's death, witnesses said his forces had abandoned some of their positions in Sanaa and that Houthi fighters had moved into one of the most heavily contested districts, seizing Saleh's house and those of some of his family members. Saudi airstrikes hit several Houthi positions in the evening, but otherwise the city saw the first easing of fighting in days," the report added.

Saudi warplanes also did not stop pounding the Houthi positions to prevent them from making more advances, benefitting Saleh's absence, as the succession issue has not immediately been resolved and it was unclear whether every faction and tribe would recognize the legitimacy of Yemen's elected government.

While the war and uncertainty continue, the Yemeni people continue to suffer and are afraid of remaining more helpless after the recent developments. Besides the killing of civilians, Yemenis face other critical problems, such as a lack of access to clean water, electricity and food. In some besieged areas, children are starving to death. A recent UNICEF report said water-related diseases have affected over 5 million Yemenis. According to the report, 20 million people have been affected by the war and 3 million suffer from a lack of nutrition. It also says more than $180 million is necessary to cope with the situation and that only $130 million is available. The U.N. says the conflict has left more than 20,000 people dead and displaced at least 3 million.