UN, AU step up efforts to get migrants home from Libya 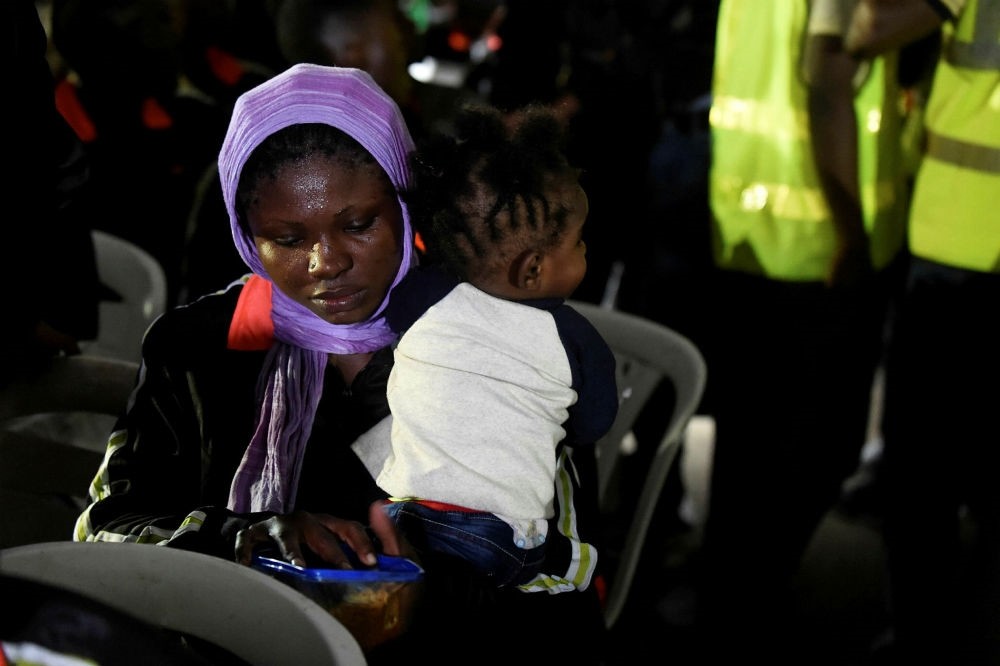 A returnee tries to feed a child after leaving a chartered aircraft that brought home 144 migrants from Libya, Dec. 5.
by Compiled from Wire Services Dec 08, 2017 12:00 am

In the face of growing pressure on slave markets in war-torn Libya, the U.N. and the African Union have stepped up the rate at which are flown migrants home from Libya, aiming to evacuate up to 20,000 in the next six weeks

The African Union has upped its goal to repatriate stranded migrants from Libya, saying in a statement that it aims to bring 20,000 Africans home in the next six weeks.

Pressure has grown on the continental body and individual African states to get their citizens out of Libya after CNN broadcast a report showing black Africans being sold as slaves in the north African country.

The African Union had earlier said it wanted to repatriate 15,000 migrants by the year's end, but increased its goal after a task force - including AU, European Union and United Nations officials -- met earlier this week.

"The immediate focus of the task force will be on the repatriation, within the next six weeks, of the 20,000 migrants currently in identified government-controlled detention centers who have expressed the wish to leave Libya," the AU said in a statement received yesterday as reported by AFP.

The group is also working to organize consular services for stranded migrants and landing rights for airlines that can fly migrants out of Libya, the statement said.

Individual African countries have started their own repatriation programs, with Nigeria, the source of the majority of undocumented migrants trying to reach Europe from Libya, bringing home 144 people earlier this week. Nigerian Foreign Ministry said at least 2,778 Nigerian migrants are still trapped in Libya and that plans are afoot to repatriate them after necessary documentation, according to AA. The ministry said no fewer than 3,000 have so far been repatriated in collaboration with the International Organization for Migration.

Rwanda has also offered to take in as many as 30,000 migrants who have suffered abuse and slave-like conditions in Libya.

Between 400,000 and 700,000 African migrants are in dozens of camps across the chaotic North African country, often under inhumane conditions, AU Commission chairman Moussa Faki Mahamat told a summit of European and African leaders last week.

The AU has a six-week plan to "access all detention centers in Libya and repatriate all those who want to return home," Mahamat said Wednesday on Twitter.

Europe has struggled to stem the flow of tens of thousands of Africans making the dangerous crossing of the Mediterranean. But many Africans still make the journey, risking death and abuse, saying high unemployment and climate change leave them little choice.

Another Nigerian recently repatriated told the AP about his ordeal.

"I paid 500,000 naira [$1,600] to one Nigerian called Mr. Fix It in 2016 to facilitate my illegal journey to Europe through Libya across the Mediterranean Sea. But on getting to Libya, he abandoned all of us to our fate," the man said, speaking on condition of anonymity because of fears for his security.

He said he and others were detained by Libyan militia members and kept in a makeshift prison where they were tortured and starved. More than 10 Nigerians, including girls, were sold as slaves. He was lucky to be rescued by security forces, he said, and was repatriated in July.

African and European leaders last week drew up an emergency evacuation plan for migrants, agreeing to airlift at least 3,800 stranded in one of more than 40 detention centers across Libya. Morocco, France, and Germany will provide the air carriers, according to Gambian senior foreign affairs official Ebrima Jobe.

Jobe criticized the "African brothers" who act as middlemen for the smugglers. "Our criminal justice system should without delay initiate the prosecution of all those Africans involved," he said. Other African countries are now joining in on repatriations, including Ivory Coast and Cameroon.

Amnesty International has criticized Europe, saying its primary aim is to close the Mediterranean route and leave hundreds of thousands of migrants trapped in Libya and facing horrific abuses.