EU to call for shared capital between Israel, Palestine and re-launch of peace talks on Friday: report 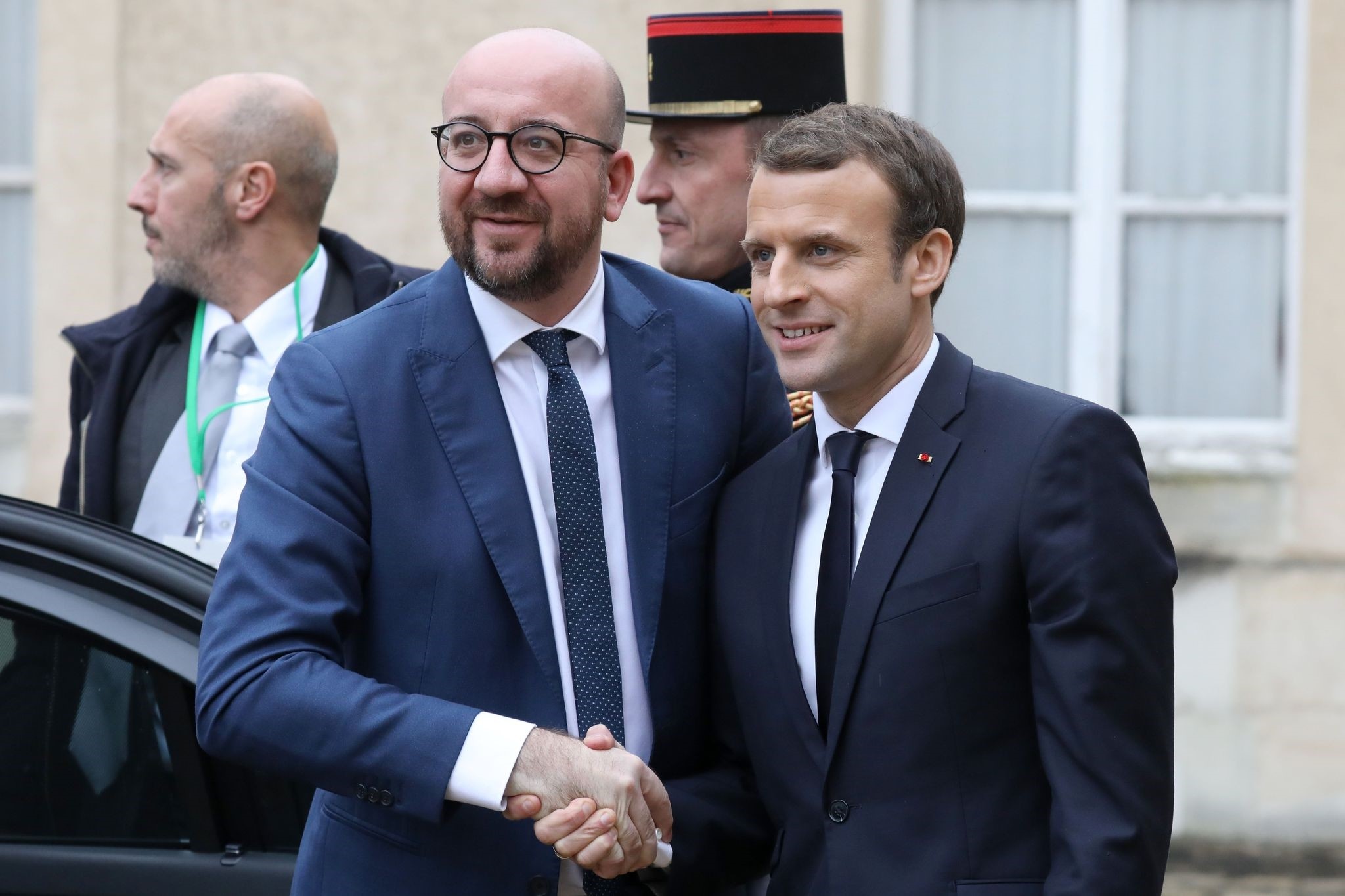 Belgian prime minister Louis Michel (L) is welcomed by French President Emmanuel Macron upon at his arrival for a summit from the underfunded G5 Sahel anti-terror coalition on December 13, 2017. (AFP Photo)
by Daily Sabah Dec 14, 2017 12:00 am

France and Belgium are planning to get the current 28 member states of the European Union to adopt a joint statement condemning Trump's Jerusalem move during a trade summit as part of Brexit talks on Friday, Israeli officials claimed on Wednesday.

In a thread on Twitter, Barak Ravid, a senior diplomatic correspondent of Israel's Channel 10 news, said that France and Belgium were pushing for a joint statement to be issued by EU members against Trump's announcement to recognize Jerusalem as the Israeli capital.

According to Ravid's sources, the ministry of foreign affairs in Jerusalem has "alerted" Israeli embassies in EU countries about the plan, and has instructed them to block the initiative by preventing EU officials from reaching a consensus.

Although no draft statement is in sight, the Israeli ministry warned that the statement could be 'very harsh' and possibly call for Jerusalem to be shared between Israel and Palestine, while urging the Israeli government to take active steps to relaunch the peace process.

Earlier last week, U.S. President Trump stoked the flames of a new crisis in the region after he signed a decision to move the U.S. Embassy in Tel Aviv to Jerusalem, and recognizing the latter as the capital of Israel. The sensitivity of the Jerusalem site comes from the fact that it is to Jews known as the Temple Mount and to Muslims as Haram al-Sharif (Noble Sanctuary). The site includes the Al-Aqsa Mosque, the third-holiest site in Islam, and the golden Dome of the Rock. It was also the site of an ancient Jewish temple, the holiest place in Judaism.

The move triggered widespread protests in the Palestinian territories and several countries amid condemnations over the weekend. Fatah called on Palestinians to keep up their demonstrations over Washington's policy shift on Jerusalem as the movement confirmed its leader will refuse to meet with U.S. Vice President Mike Pence later this month in protest of the controversial decision. The announcement also drew criticism from every other U.N. Security Council member at an emergency meeting on Friday.

Jerusalem was first put under international sovereignty and control with the 1947 U.N. Partition Plan, which recommended the division of historical Palestine between Jewish and Arab states in order to end the conflict in the region. The U.N. opted for a special status, as Jerusalem is holy to Jews, Christians and Muslims. However, during the 1948 Arab-Israeli war, Israeli forces declared western Jerusalem part of their state, ignoring the U.N. recommendation.