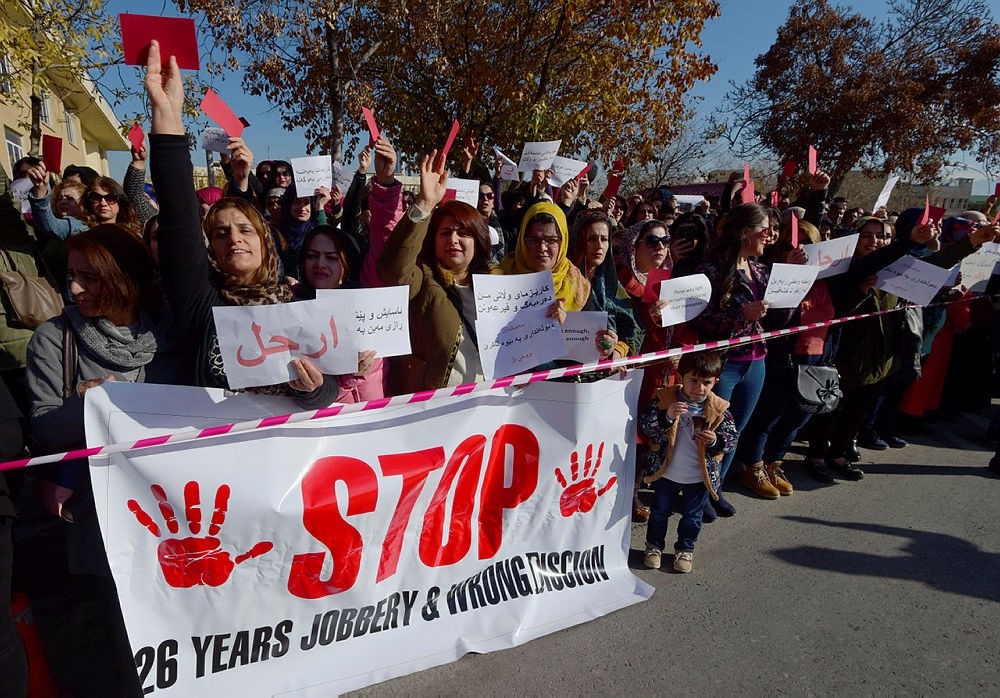 About 1,250 protesters, mostly teachers, students, and civil servants, protested the KRG in the city of Sulaymaniyah. (AA Photo)
by Compiled from Wire Services Dec 19, 2017 12:00 am

In a second day of unrest amid tensions with Baghdad, several public facilities, including the offices of opposition groups such as the Iraqi Turkmen Front (ITF), were torched by protesters in the city of Sulaymaniyah in northern Iraq's Kurdish Regional Government (KRG) region.

About 1,250 protesters, mostly teachers, students, and civil servants, were out in the city of Sulaymaniyah. Regional health officials said six were injured after the crowd was shot at with rubber bullets and sprayed with tear gas by security forces.

Aydın Maruf, an ITF lawmaker for Irbil, told Anadolu Agency that demonstrators had set fire to the ITF's office in the city's Kifri district.
Since Monday, Sulaymaniyah has been the scene of large demonstrations by civil servants to protest public-sector salary delays and perceived government corruption.

According to Maruf, protesters also torched the local headquarters of the Kurdistan Democratic Party (KDP) in Sulaymaniyah, as well as the Koy Sanjaq prefecture building near Erbil, municipal capital of the KRG.

Shorash Ismail, the police chief in Koy Sanjaq, told Anadolu Agency that at least 15 people had been injured -- two seriously -- in clashes between security forces and protesters in the prefecture.

Protesters also demonstrated against KRG officials in the Iraqi Kurdish town of Ranya, with at least three people killed and 80 wounded in clashes between local security forces and protesters demanding that the KRG quit.

Local authorities have reportedly stepped up security throughout the region with a view to preventing further escalations.

Sulaymaniyah is considered a bastion of the Kurdish region's leading opposition parties, including the Patriotic Union of Kurdistan (PUK) and the Gorran Movement (Movement for Change).

In a related development on Tuesday, the KRG issued a warrant for the arrest of Shaswar Abdelwahid Qadir, leader of the "New Generation" movement, which had spearheaded a popular campaign against the KRG's illegitimate Sept. 25 poll on regional independence.

Qadir has been accused by KRG authorities of inciting demonstrators to attack public facilities "with a view to overthrowing the government".
Tension has been high in the region since the central government in Baghdad imposed tough measures when the KRG unilaterally held an independence referendum on Sept. 25 and Kurds voted overwhelmingly to secede.

The move, in defiance of Baghdad, also alarmed neighboring Turkey and Iran.

Stringent economic measures taken after the Baghdad central government slashed funds to the KRG in 2014 when it built its own oil pipeline to Turkey in pursuit of economic independence have led to sporadic protests over unpaid civil servant salaries in the last three years.

After the September referendum, the Iraqi government responded by seizing Kurdish-held Kirkuk and other territory disputed between the Kurds and the central government. It also banned direct flights to Kurdistan and demanded control over border crossings.