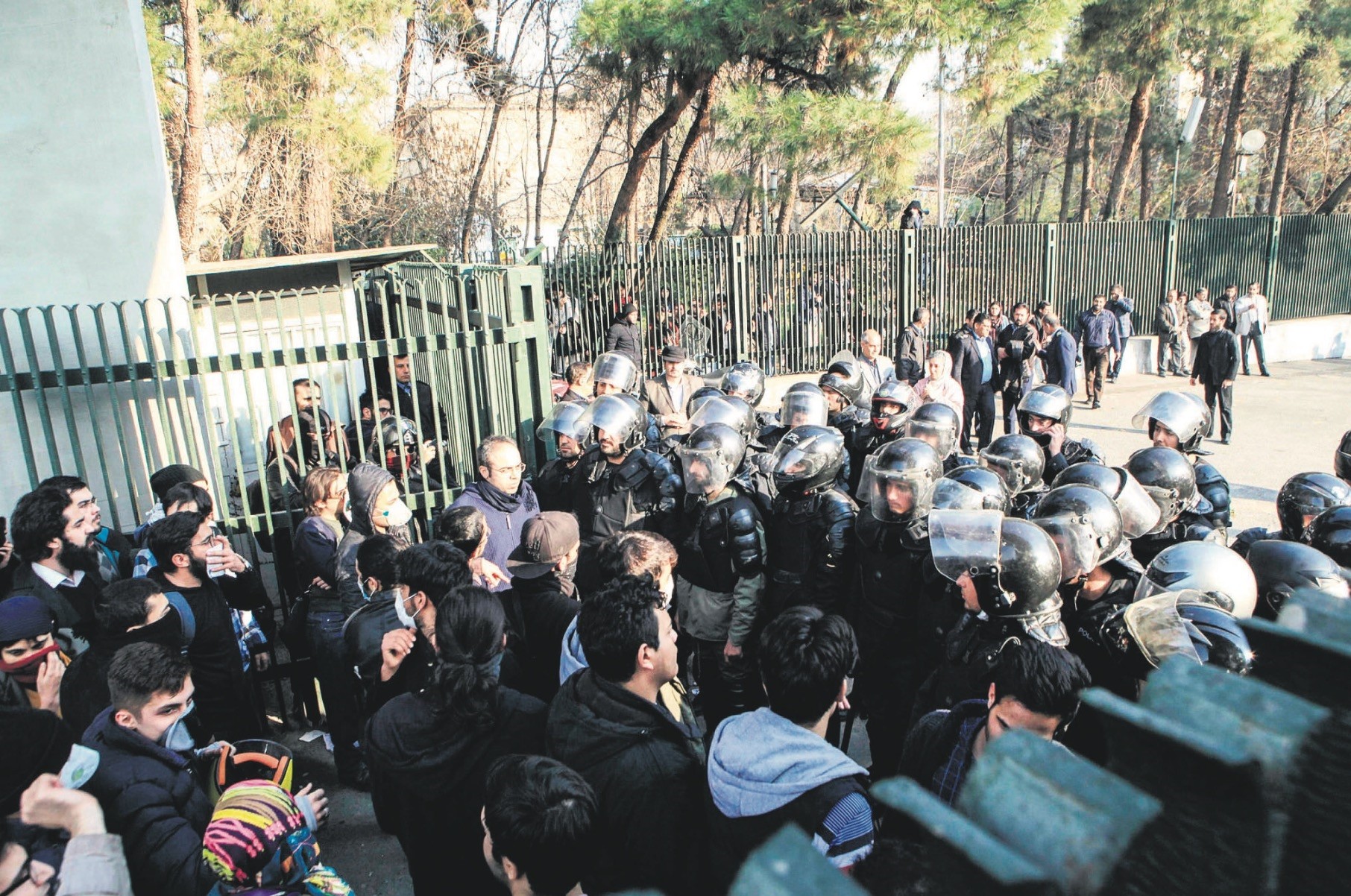 Thousands of Iranians took to the streets not only to protest the government but also the supreme leadership, even mentioning the ousted Shah regime with reference to the country's expansionist foreign policy in the region

Masses in Iran have started protests across the country, chanting slogans against the country's foreign policy and the supreme authority. Protesters' slogans have revealed displeasure with Iran's activities in Syria and aid to the Lebanese-based group Hezbollah, as Tehran's direct involvement in the six-year-old war has become a considerable burden on its economy. Demonstrators also asked for freedom for political prisoners, for whom the death sentence is among the options.

The protests started unexpectedly and spread rapidly to central cities. Unlike the previous protests, like those in 2009, the Iranians on the forefront were not organized or already politicized groups, like students or certain organizations but ordinary people who are displeased with the ongoing economic problems. These people are observed to link the economic problems directly to Iran's expansionist ambitions as one of the popular slogans is "Leave Syria, look at Iran."

Similar to the beginning of the Arab Spring in Syria, Egypt and Tunisia, Iranians have also been largely using social media to organize and decide on the lieu and time of the protests. "[The protesters] took on new importance after the economic protests began Thursday, sparked by social media posts and a surge in prices of basic food supplies, like eggs and poultry. Thousands have gone into the streets of several cities in Iran, beginning first in Mashhad, the country's second-largest city and a holy site for Shiite pilgrims. Demonstrators also have criticized Iran's government during the protests, with social media videos showing clashes between protesters and police. The semi-official Fars news agency said protests on Friday also struck Qom, a city that is the world's foremost center for Shiite Islamic scholarship and home to a major Shiite shrine," an Associated Press (AP) report said.

Another discerning peculiarity of the protests was that the ousted and exiled Shah's name was pronounced. After the revolution in 1979, it was unusual to mention the Shah and his administration, as the government is very harsh on criticizing the previous regime. "State TV also aired its first reports on the protests Saturday, acknowledging some protesters chanted the name of Iran's one-time shah, who fled into exile just before its 1979 Islamic Revolution. "Counterrevolution groups and foreign media are continuing their organized efforts to misuse the people's economic and livelihood problems and their legitimate demands to provide an opportunity for unlawful gatherings and possibly chaos," state TV said. State TV aired live Saturday's pro-government "9 Day Epic" demonstrations, named for the date on the Iranian calendar that the 2009 protests took place. The footage showed people waving flags and carrying banners bearing the image of Iran's Supreme Leader Ayatollah Ali Khamenei," the AP report wrote.

After the protests were broken up in several cities, including even Qum, which is the most famous center for Shiite education, 5,000 people gathered in Tehran as well, calling for 'criminal trials for Mir Hossein Mousavi and Mahdi Karroubi, leaders in the Green Movement who have been under house arrest since 2011." President Hassan Rouhani, who has a soft stance, is known for being unable to challenge the supreme leadership.

"Iran's economy has improved since the nuclear deal, which saw Iran limit its enrichment of uranium in exchange for the end of some of the international sanctions that crippled its economy. Tehran now sells its oil on the global market and has signed deals for tens of billions of dollars of Western aircraft. That improvement has not reached the average Iranian, however. Unemployment remains high. Official inflation has crept up to 10 percent again. A recent increase in egg and poultry prices by as much as 40 percent, which a government spokesman has blamed on a cull over avian flu fears, appears to have been the spark for the protests," the AP said. Similarly, a Reuters report underlined the reduction in Iran's oil export. "Imports of Iranian crude oil by major buyers in Asia tumbled 29 percent in November from the same month a year ago to the lowest volumes since April 2016, government and ship-tracking data showed," the report said.

Iran has been fighting in Syria, aiding the rebels in Yemen and is in dispute with Israel and the U.S. Tehran also suffers from the drastic decrease of oil prices in the last years. Although hopes had flourished after former U.S. President Barack Obama led a deal to curb Iran's nuclear power but lift the sanctions, the new President Donald Trump has adopted a harsh stance towards the theocratic state. After the protests started, the U.S. State Department issued a statement, calling for support for the protesters. "Iran's leaders have turned a wealthy country with a rich history and culture into an economically depleted rogue state whose chief exports are violence, bloodshed and chaos," the statement read. "Meanwhile, U.S. Secretary of State Rex Tillerson's comments in June to Congress saying America is working to "support of those elements inside of Iran that would lead to a peaceful transition of that government" has been used by Iran's government of a sign of foreign interference in its internal politics," the AP wrote.

Similarly, Israel has been leading an anti-Iranian campaign, considering the country a threat to its national security. Iran has also failed to repair its relations with the Gulf due to the war in Yemen, where Iran-aligned Houthi rebels have gone into a war with the Saudi-backed central government and a Saudi-led coalition. The growing Iranian influence was accounted for the country's ability to mobilize Shiites in the region, which is seen as an existential threat by the Gulf nations that have a considerable Shiite population. Despite the recent amelioration of relations between Turkey and Iran after the Astana meetings started under the mediation of Russia, the two neighbors have quarreled over Syria and Iraq.