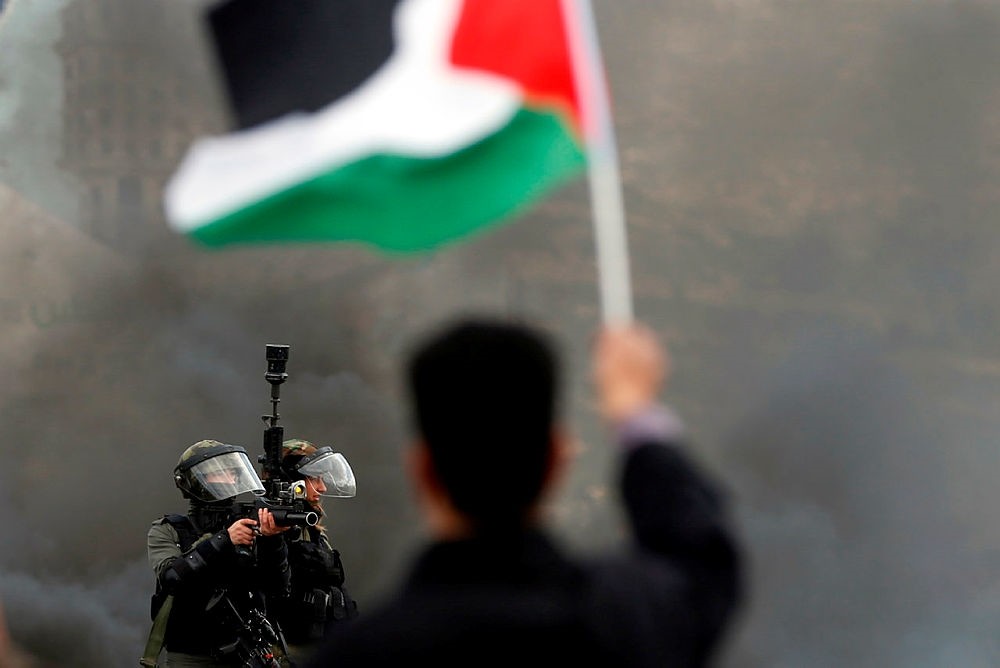 Israeli border guards take aim as a Palestinian protester waves the national flag during clashes following a demonstration in the West Bank city of Ramallah, March 9, 2018. (AFP Photo)
by Mar 09, 2018 12:00 am

Demonstrators, for their part, hurled stones and empty bottles at troops and blocked roads with flaming car tires.

Similar clashes were seen in the villages of Mazraa al-Gharbia, Billin, Nilin and Nabi Saleh near Ramallah, and in the village of Kafr Qaddum near Nablus.

An Israeli military spokesman said the slain man had been about to throw a fire-bomb at the troops, who were responding to an immediate threat when they shot him. He added that the incident in the city of Hebron would be reviewed.

U.S.-led peace talks between Israel and the Palestinians broke down in 2014 and a new push by President Donald Trump's administration to restart negotiations has shown little progress so far.

Tensions between the sides have risen since Trump declared on Dec. 6 that he recognizes Jerusalem as the capital of Israel. Outraged Palestinian leaders said Washington could no longer take the lead in peace efforts but Israel has said the United States should remain peace-broker.

Trump's announcement and the planned move in May of the U.S. embassy from Tel Aviv to Jerusalem — home to sites holy to Muslims, Jews and Christians — reversed decades of U.S. policy on the city. Its status is one of the biggest obstacles to reaching a peace agreement.

The Palestinians want East Jerusalem as the capital of a future state. Israel says the entire city is its indivisible, and eternal capital.