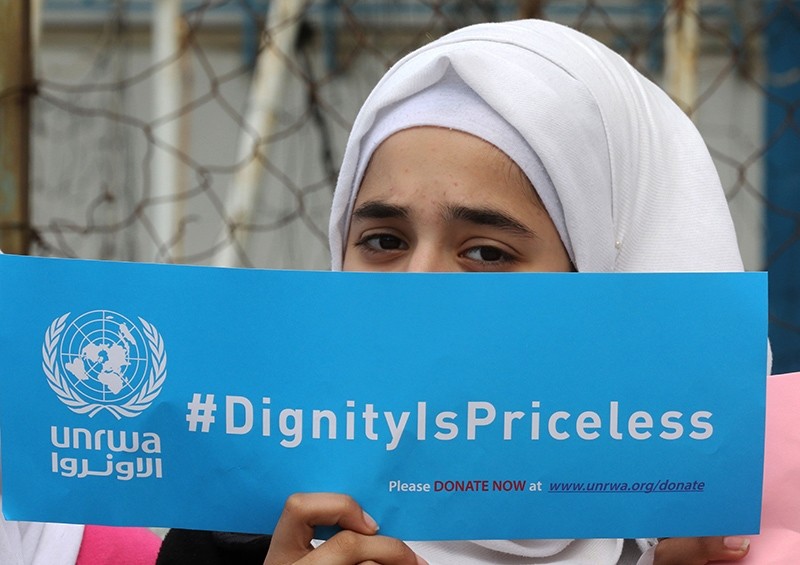 A Palestinian refugee holds a placard at a school belonging to the United Nations Relief and Works Agency for Palestinian Refugees (UNRWA) in Sebline, Lebanon, March 12, 2018. (AFP Photo)
by Mar 14, 2018 12:00 am

The U.N. Palestinian agency seeks urgent funding at Rome conference so the agency can keep schools and medical services open until May after U.S. funding cut

Global powers will gather in Rome on Thursday to discuss the future of the U.N. agency for Palestinian refugees, which faces an unprecedented crisis after the United States froze tens of millions of dollars in funding.

U.S. President Donald Trump's administration has so far committed only $60 million to the agency this year, down from $360 million in 2017.

He has frozen two planned payments worth more than $100 million — one for UNRWA's central budget and one for food aid.

Trump continues to pressure the Palestinians to end their boycott of his administration sparked by his December recognition of Jerusalem as Israel's capital.

A major funding drive launched by UNRWA after the U.S. freeze has raised little new money and diplomats are not optimistic about getting major pledges in the Italian capital.

U.N. officials want European countries to step in to fill part of the gap but are especially looking at Gulf Arab countries.

Fear is rife about the future of the organization that employs more than 20,000 people across the Middle East, the vast majority Palestinians.

UNRWA was established after the war surrounding Israel's creation in 1948 when around 700,000 Palestinians were expelled or fled.

It offers vital support for these refugees and their descendants in Syria, Lebanon, Jordan and the West Bank and Gaza, providing services for more than three million people.

This includes education for around half a million students, with nearly 30 percent of its funding coming from the U.S.

In January, Trump tweeted "we pay the Palestinians HUNDRED OF MILLIONS OF DOLLARS a year and get no appreciation or respect," accusing them of walking away from peace negotiations.

Two weeks later his administration confirmed it would hold back tens of millions in aid to UNRWA, saying it wanted the rest of the world to pay more.

Krahenbuhl labeled it the agency's worst ever financial crisis and launched a major funding drive, turning the front page of its website into a call for donations.

Senior officials traveled around the world to push for funds, with UNRWA aiming to find nearly half a billion dollars in new money.

But since the launch of the "Dignity is Priceless" campaign, the only new funding was a $900,000 grant from Kuwait, though European countries have brought forward donations planned for the summer.

Private donations ran only into the "hundreds of thousands," Krahenbuhl said, calling it "not groundbreaking." UNRWA did not respond to multiple requests for a more specific figure.

Krahenbuhl played down concerns the world was not stepping up to fill the gap.

"It takes a lot of political dialogue for these things to move forward, especially in light of the size of the shortfall," he told AFP.

"States were planning to contribute $20-25 million to UNRWA and suddenly see a shortfall that has increased by $300 million. It is quite natural you will not have one single state that will come forward and close that shortfall."

But UNRWA employees face deep concerns about the sheer size of the gap.

Nicola Jones, of the Overseas Development Institute think tank, said she expected UNRWA leaders to be "really concerned" by the slow pace of new funds.

"They really did try to have a high profile public awareness campaign about the cost of withdrawing funding and I think it is clearly extremely disappointing that it hasn't been fruitful."

The Rome conference, co-hosted by Sweden, Egypt and Jordan, will seek fresh momentum.

U.N. Secretary General Antonio Guterres will attend, his office confirmed on Tuesday, while Acting Assistant Secretary for Near Eastern Affairs David Satterfield is expected to represent the U.S.

"When any agency depends on a single donor it is a vulnerability," said Sweden's ambassador to the United Nations, Olof Skoog.

"Sharing the responsibility more equally is therefore reasonable, but we expect the United States to stay committed."

Trump is due to announce his proposal for new Israel-Palestinian peace talks and Lovatt said all countries were waiting to see what vision it proposes for UNRWA.

He expected Europeans in Rome to make a "concerted effort to corner the Americans and convince them to reconsider."