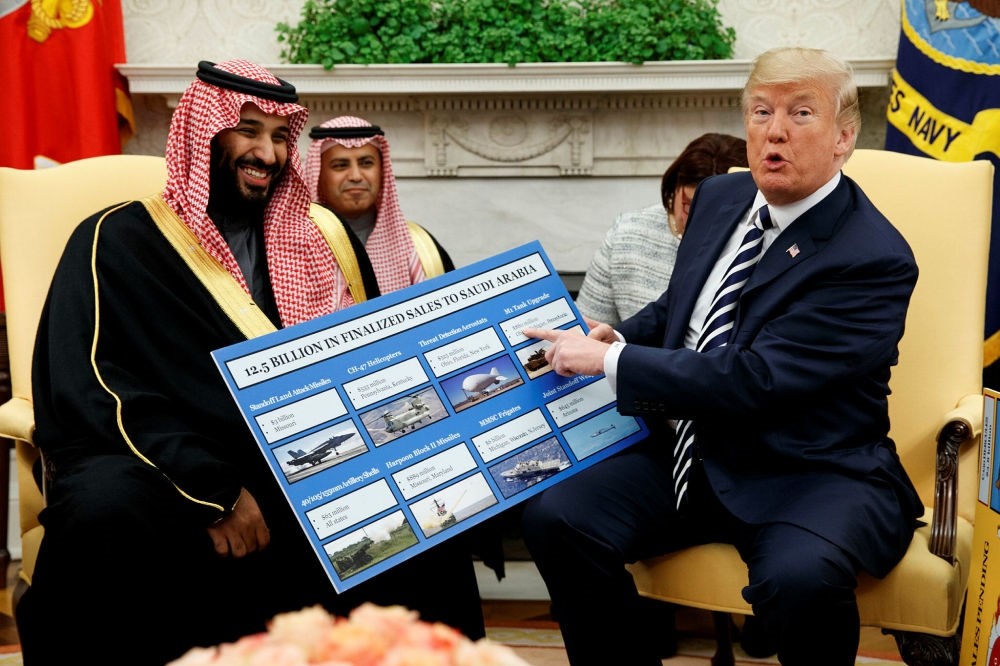 President Donald Trump shows a chart highlighting arms sales to Saudi Arabia during a meeting with Saudi Crown Prince Mohammed bin Salman in the Oval Office of the White House, March 20.
by Compiled from Wire Services Mar 22, 2018 12:00 am

"The relationship, now, is probably as good as it's really ever been, and I think will probably only get better. Tremendous investments made in our country. And that means jobs for our workers, jobs for our people," Trump said in a press briefing after the meeting.

Trump held up charts to show the depth of Saudi purchases of U.S. military hardware, ranging from ships to missile defense to planes and fighting vehicles. "Saudi Arabia is a very wealthy nation, and they're going to give the United States some of that wealth, hopefully in the form of jobs, in the form of the purchase of the finest military equipment anywhere in the world," he said.

In the Oval Office, Trump and the crown prince praised the strength of U.S.-Saudi ties, which had grown strained under the Obama administration in part over differing views toward Riyadh's regional rival, Iran. Not so with Trump, who has taken a hardline view against Iran similar to that of the Saudi crown prince who has compared Iran's supreme leader to Adolf Hitler.

Trump and Prince Mohammed discussed an agreement last year for $200 billion worth of Saudi investments with the United States, including large purchases of U.S. military equipment. Trump said the military sales contributed to the creation of 40,000 American jobs.

The talks were part of the first visit by the prince to the United States since he became the heir apparent last year to King Salman. The crown prince, who is also the defense minister, is on a public relations blitz while traveling in the United States, with stops in New York, Boston, Seattle, Los Angeles, San Francisco and Houston to cultivate investments.

Trump praised the king's move to elevate Mohammed and called U.S.-Saudi ties strong as ever. "I thought your father made a very wise decision. And I miss your father - a special man," he said. King Salman is to visit the United States later this year.

Saudi Arabia's young crown prince has an ambitious list of to goals: modernize his conservative kingdom, weaken Iran's hand across the Mideast and rehabilitate his country's image in the eyes of Americans during his tour.

Prince Salman, in particular, has been closely identified with the three-year-old war in the Arab world's poorest country, which started while he was defense minister. It's not the only regional mess the Saudis are in. In November, U.S. officials voiced unease when Lebanon's prime minister unexpectedly resigned while in Riyadh. The Saudis are working aggressively to change perceptions. They've cast themselves as essential partners against extremist groups and, especially since Trump's maiden overseas voyage last year, touted their lavish purchases of high-tech goods from job-creating American companies.