Support for Palestinians grows after Israeli violence in Gaza 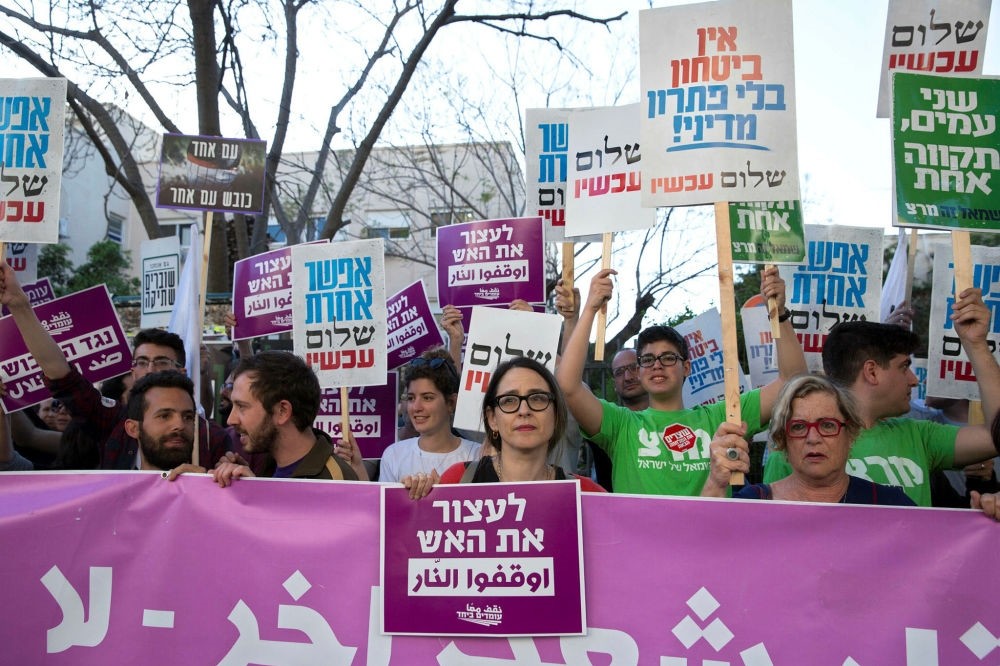 In solidarity with Palestinians, hundreds of Israelis demonstrated in Tel Aviv against the Israeli Defense Forces' violence, criticizing it for the use of live ammunition on civilians

Hundreds of people in the Israeli capital Tel Aviv on Sunday protested Israeli forces' violence against Palestinian civilians last Friday, according to Israeli radio. In solidarity with Gaza, around 250 people protested Israel after its soldiers killed 18 Palestinians and wounded hundreds more, as reported by Israeli newspaper Haaretz.

The mostly leftist Israelis gathered in protests dubbed as "Create hope, stop the next war," chanted slogans against the Israeli army and called for an end to the violence on Palestinian civilians as well as a political solution and resumption of the peace process.

Israel's military has faced questions from rights groups over its use of live fire on Friday, the bloodiest day in the conflict since a 2014 war, while Palestinians accused soldiers of firing on protesters posing no threat. Both U.N. Secretary-General Antonio Guterres and EU diplomatic chief Federica Mogherini have called for an independent investigation.

Israel's Public Security Minister Gilad Erdan said yesterday that "there is no reason" for Israel to cooperate with an U.N. inquiry into army actions, according to dpa. "The United Nations has become the foreign ministry of the Hamas terrorist organization," he added. Israel's defense minister on Sunday rejected international calls for an investigation into deadly violence along Gaza's border with Israel, saying troops acted appropriately and fired only at Palestinian protesters who posed a threat.

The death toll from Friday's violence along the border between the Gaza Strip and Israel rose by one to 18 yesterday when the health ministry in the enclave confirmed another Palestinian had died from his wounds. It was the area's deadliest violence since a war four years ago.

The protest is scheduled to culminate on May 15, when Palestinians mark the "Nakba" or "Catastrophe" when hundreds of thousands fled or were driven out of their homes in 1948, when the state of Israel was created. Israel has long ruled out any right of return, fearing it would lose its Jewish majority. It will also coincide with the U.S. embassy's planned move on May 14 from Tel Aviv to Jerusalem, which has inflamed tensions. Israel withdrew from Gaza in 2005, but citing security concerns, still tightly controls its land and sea borders. Egypt also keeps its Gaza frontier largely shut. Gaza's continued border closure has made it increasingly difficult for Hamas to govern. Life in the coastal strip has deteriorated further in recent months, with rising unemployment, grinding poverty and daily blackouts that last for hours.

Israel had deployed troop reinforcements along the border, including more than 100 special forces snipers, saying it would prevent attempts to break through the fence. "While some Palestinian demonstrators have thrown stones and other objects towards the fence, it's hard to believe how this would be an imminent danger to the lives of well-equipped soldiers protected by snipers, tanks and drones," Amnesty International said.