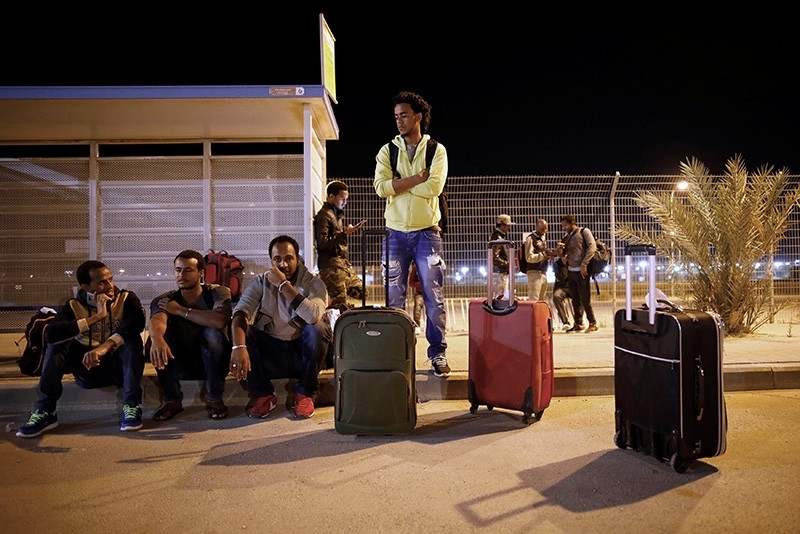 Israel on Wednesday released from detention a small group of African migrants who had been awaiting deportation after the collapse of an international deal to send them to Rwanda.

Some 200 additional migrants are still being held at the Saharonim detention center in southern Israel awaiting possible deportation to Uganda but their fate depends on whether an Israeli envoy who visited the east African state on Wednesday had managed to secure a deal for them to be taken in.

In the event agreement is not reached, they too will be freed, probably on Thursday. The long-term fate of the freed migrants was unclear but Israeli Prime Minister Benjamin Netanyahu said he was seeking a new relocation deal, although he gave no details.

Netanyahu said on Tuesday he was canceling an agreement with the U.N. refugee agency to relocate thousands of African migrants, bowing to right-wing at home pressure to scrap the deal.

Netanyahu's critics seized on his backtracking on the arrangement - under which thousands of other migrants would have won the right to remain in Israel - as a sign of political weakness.

For the estimated 37,000 migrants in Israel, most of them from Eritrea and Sudan, the whirlwind of announcements over the past three days about their future has swept their status even deeper into limbo.

On Monday, Netanyahu announced the arrangement with the UNHCR that would have relocated about 16,250 migrants to Western countries.

But the fact that thousands more would be allowed to stay raised an outcry from right-wing politicians and on social media from Netanyahu's nationalist voter base, which wants the migrants expelled. He then announced he was putting the agreement's implementation on hold and by Tuesday, he killed it.

The 58 migrants set free from Saharonim in the south of the country boarded buses to Tel Aviv. They were freed because the state could not give assurances to the Supreme Court that it had found a safe haven for them abroad.

"I have been detained for six months and at lunch time today the police came and told me I was being released, I don't know where I'll go yet," Musia Bara from Eritrea told Israel's Channel 1.

Several hundred migrants held a demonstration in central Jerusalem later on Wednesday demanding to be allowed to stay and for the forced deportations to be stopped.

Eritrean Muluebrhan Ghebrihiwet, 27, one of the demonstrators who has been in Israel for almost seven years and who was released from detention last month, said Israel's government was playing mind games with the migrants.

"We are grateful to the Israeli public for their support but the government has waged a psychological war against us and they have done so because of politics but we are refugees, human beings and we demand that they stop," he said.