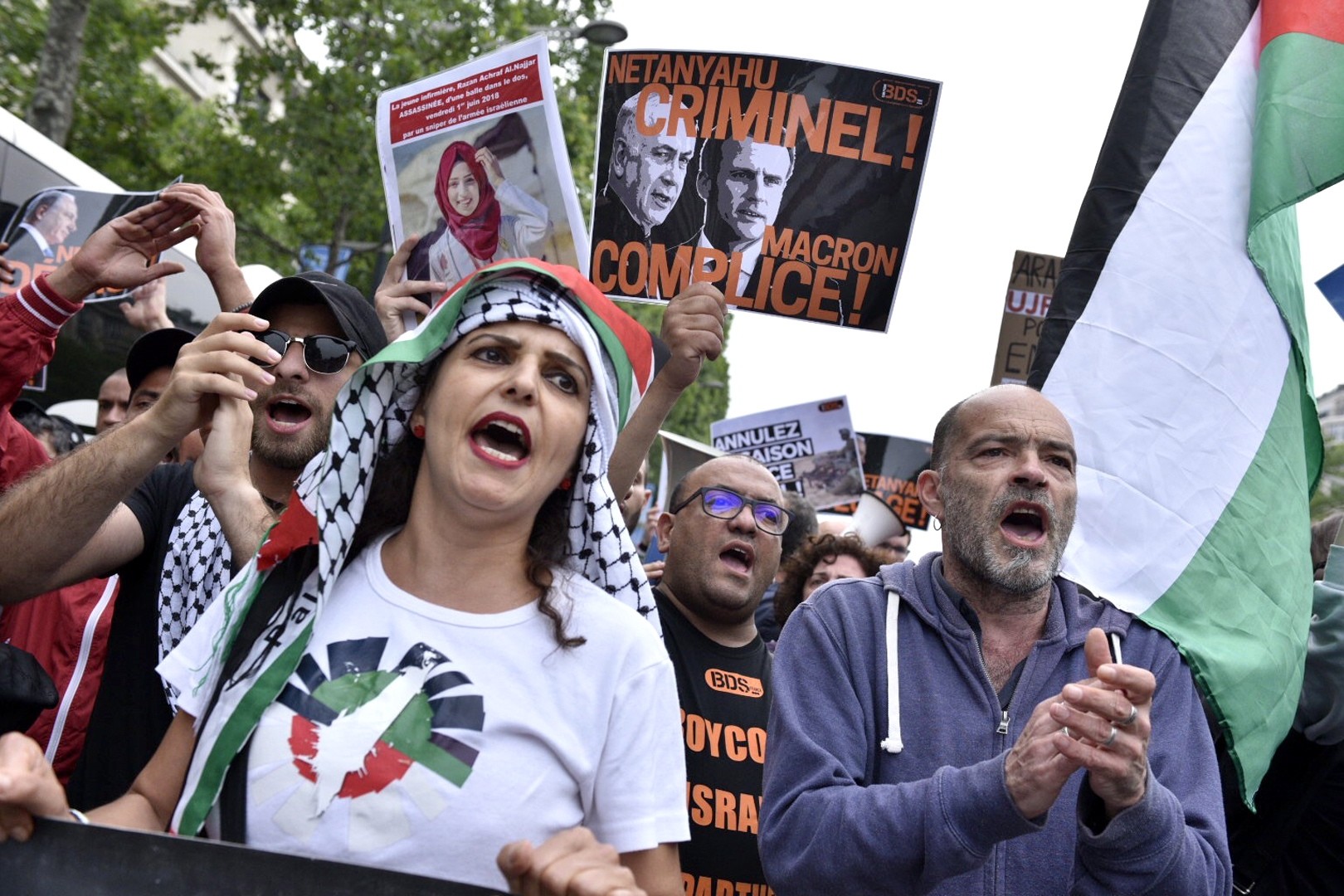 Protesters shout slogans against Netanyahu during a rally on the Champs Elysees avenue in Paris, June 5.
by Yusuf Ziya Durmuş Jun 07, 2018 12:00 am

Amid the resurgence of anti-Palestinian violence, Israeli Prime Minister Benjamin Netanyahu has faced protests during his tour of Europe this week. In the first two days of his itinerary where he met German and French leaders on Monday and Tuesday, respectively, Netanyahu was met by protesters in the European capitals, condemning Israeli violence against Palestinians.

Israeli forces killed 61 Palestinians and injured hundreds of others during days of protests along the Gaza border against the occupation of Palestinian territories and the opening of a U.S. Embassy in Jerusalem last month.

In Germany, protesters convened outside the parliament, situated across Chancellery where Netanyahu met Chancellor Angela Merkel on Monday. They chanted slogans "Freedom to Palestine," "Netanyahu not welcome" and carried photos of Palestinians killed by Israeli troops. Some held pictures of Razan al-Najjar, a 21-year-old Palestinian paramedic who was the latest victim of Israeli aggression. Al-Najjar was shot dead while trying to treat protesters injured by Israeli gunfire last week in the Gaza Strip. Burhan Yassin, one of the protesters, told Anadolu Agency (AA) that Europe's political leaders should not receive Netanyahu "while Palestinians are killed or arrested every day in the Palestinian territories."

"He came here to ask for more weapons and money to kill more Palestinians. It is unacceptable," Yassin says.

On Tuesday, protesters took to the streets in Paris to protest the visiting Israeli premier - their focus was Israel's policies toward Palestinians. They called the Israeli prime minister to be tried as a war criminal. Al-Najjar's photos were also prominent in the Paris rally. France, a close ally of Israel, barred a larger rally outside Grand Palais exhibition hall where French and Israeli leaders were scheduled to launch a joint initiative. Instead, protesters were forced to stage their rally far from the site. Several journalist unions in France also protested the Israeli leader's visit. They condemned the killings of civilians in Gaza and the attacks on journalists. At least two journalists were killed by Israeli gunfire while covering protests on the Gaza border between March and April. French unions expressed disbelief on how "Netanyahu is allowed to visit like nothing happened while experts consider what happened in Gaza amounting to war crimes."

Netanyahu was scheduled to meet British Prime Minister Theresa May when the Daily Sabah went to print and rallies against the visit were expected to be held there as well. The Israeli Prime Minister was met by thousands of protesters during a visit to London last year.