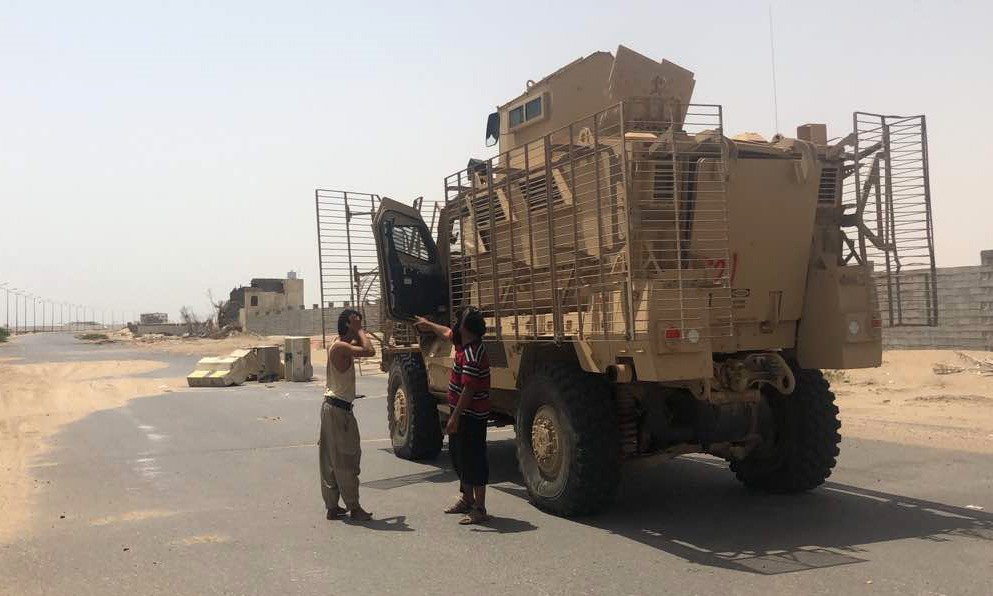 Yemeni pro-government forces backed by the Saudi-led Arab military alliance advance in their fight against Houthi rebels in the area of Hodeida's airport on June 18, 2018. (AFP Photo)
by Compiled from Wire Services Jun 19, 2018 12:00 am

Yemeni government forces, backed by the United Arab Emirates, entered Hodeida airport on Tuesday, the UAE said, as the fight for control of the starving nation's main port for food shipments rages on.

A Yemeni military source confirmed the report to AFP.

Troops from the UAE and neighboring Saudi Arabia are the mainstay of an Arab coalition that has been fighting the Houthi Shiite rebels in support of the Yemeni government since 2015.

Yahia Sharaf Eddin said four of the dead were women and that the strike took place in the district of al-Gharasi.

Earlier in the day, witnesses said another airstrike targeted a tractor driver and his assistant in eastern Hodeida. The driver was digging trenches for Houthi fighters, witnesses said. Both were killed.

Meanwhile, United Nations special envoy for Yemen Martin Griffiths left the capital Sanaa after three days of talks with rebel leaders. He briefed the U.N. Security Council on Monday by video from Sanaa on his proposals to restart political negotiations to end the three-year conflict.

Griffiths arrived in Yemen to try to avoid an all-out assault on Hodeida.

The campaign to seize control of Hodeida threatens to worsen Yemen's humanitarian situation.

The offensive has faced criticism from international aid groups, who fear a protracted fight could force a shutdown of the port and potentially tip millions into starvation. Some 70 percent of Yemen's food enters via the port, as well as the bulk of humanitarian aid and fuel supplies. Around two-thirds of the country's population of 27 million relies on aid and 8.4 million are already at risk of starving.