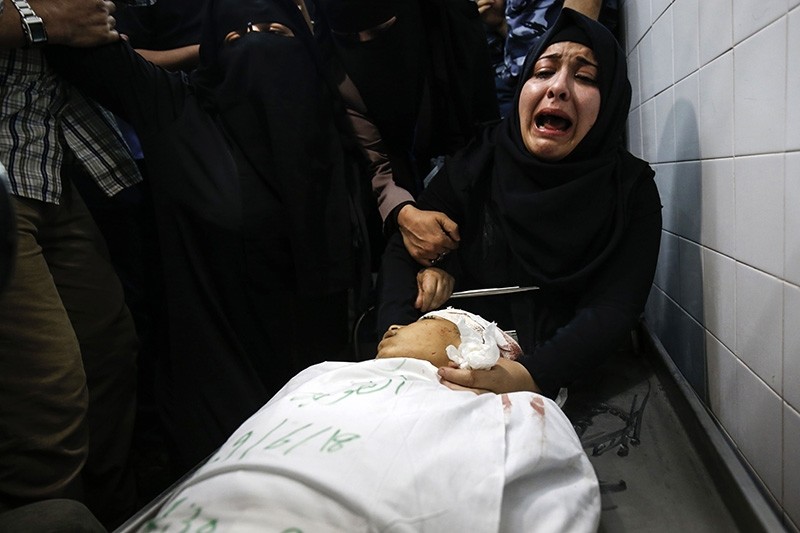 The mother of Yasser Abu al-Naja, a 13-year-old Palestinian boy who was killed in border clashes near Khan Yunis, reacts at a hospital morgue in the Gaza Strip on June 29, 2018. (AFP Photo)
by Compiled from Wire Services Jul 02, 2018 12:00 am

The Israeli army has killed 25 Palestinian children in the occupied West Bank and the blockaded Gaza Strip since the beginning of 2018, a human rights nongovernmental organization said yesterday.

In a press release, Defense for Children International-Palestine, which advocates for the rights of Palestinian children in the Israeli-occupied Palestinian territories, held the Israeli army responsible for the death of 25 children, 21 in the Gaza Strip, this year alone. It went on to assert that Israeli forces had deliberately killed minors with the use of live ammunition.

According to the nongovernmental organization, this death toll includes 21 children targeted directly, 11 of whom were shot in the head or neck.

"The Israeli army continues its escalations using lethal force and live bullets against Palestinian children who pose no direct threat to it," it said in the statement, as reported by Anadolu Agency.

Israeli treatment of Palestinian children in military detention has become a major area of concern for the international community. Israeli forces have detained 353 minors since the start of this year, some of whom were later released, the two nongovernmental organizations, the Commission of Detainees and Ex-Detainees Affairs and the Palestinian Prisoners Society said.

In January and February, Israeli authorities issued house arrest orders for 102 minors, most from occupied East Jerusalem, according to their joint statement released in April.

Lately, Israel was criticized by a U.N. human rights body for its killings of protesters in Gaza and treatment of the Palestinians, declaring it as "war crime" under the Statute of Rome. The high casualty toll triggered a diplomatic backlash against Israel and new charges of excessive use of force against unarmed protesters.

According to the U.N., over the past seven weeks, over 100 Palestinian demonstrators have died at the hands of the Israeli military. Among the dead are children, journalists, medics and many young unemployed men.

Approximately, 12,000 have been injured. Over 1,000 children have been injured by Israeli forces in the besieged Gaza Strip during demonstrations, according to the U.N. Children's Fund (UNICEF).

The U.N. body pointed out that some injuries had been severe and potentially life altering, including amputations.