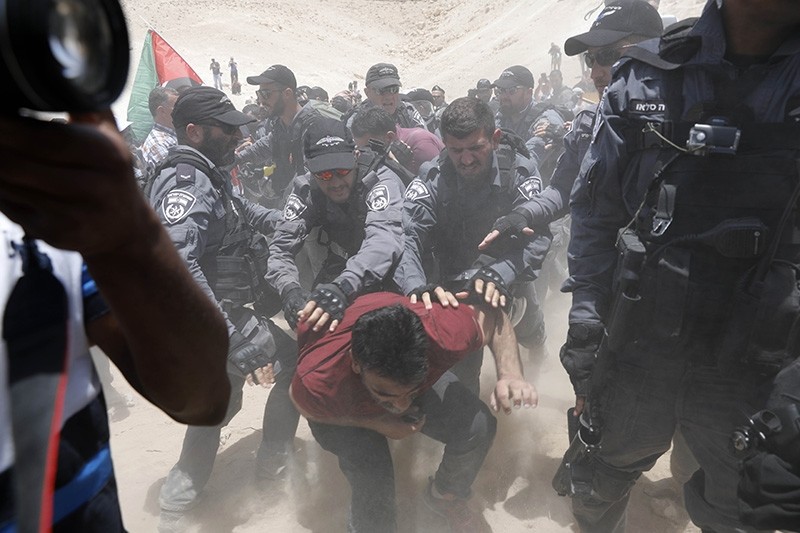 Palestinian demonstrators clash with Israeli policemen as they try to prevent an Israeli tractor from entering the Bedouin community of Khan al-Ahmar on July 4, 2018. (EPA Photo)
by Associated Press
Jul 04, 2018 12:00 am

Israeli police scuffled with activists protesting the planned demolition of a Bedouin hamlet in the West Bank on Wednesday amid international opposition to the razing of the site.

"This is a vicious, barbaric attack on peaceful demonstrators and they are trying to demolish Khan Al-Ahmar," Mustafa Barghouti, a Palestinian legislator, said.

Israel says the structures that make up the Khan al-Ahmar encampment were illegally built and pose a threat to residents because of their proximity to a highway.

Police could be seen dragging a handcuffed woman and pushing a Bedouin man. A construction vehicle flattened earth near the site.

The village outside the Kfar Adumim settlement, home to 181 Palestinian Bedouins, is set to be demolished at an unknown date after Israel's Supreme Court approved the move in May after years of legal battles.

Israel agreed to resettle the residents in an area some 12 kilometers (7 miles) away. Israel captured the territory in the 1967 Mideast war.

The West Bank's Arab Bedouin are a small, impoverished minority among the broader Palestinian population. Like many other Bedouin encampments, residents of Khan al-Ahmar live in corrugated shacks or tents, often without electricity or running water, and raise livestock.

Critics say it is nearly impossible to get a building permit from Israel and that the village's demolition and the removal of its residents is a ploy to clear the way for new Israeli settlements.

The village is located in the 60 percent of the West Bank known as Area C, which remains under exclusive Israeli control and is home to dozens of Israeli settlements. Israel places severe restrictions on Palestinian development there and home demolitions are not unusual.

As part of interim peace deals in the 1990s, the West Bank was carved up into autonomous and semi-autonomous Palestinian areas, known as Areas A and B, and Area C, which is home to some 400,000 Israeli settlers.

The Palestinians say that Area C, home to an estimated 150,000 to 200,000 Palestinians, is crucial to the economic development of their future state.

The U.N.'s main human rights body on Tuesday called on Israel to abandon the demolition plans as it violated international law.