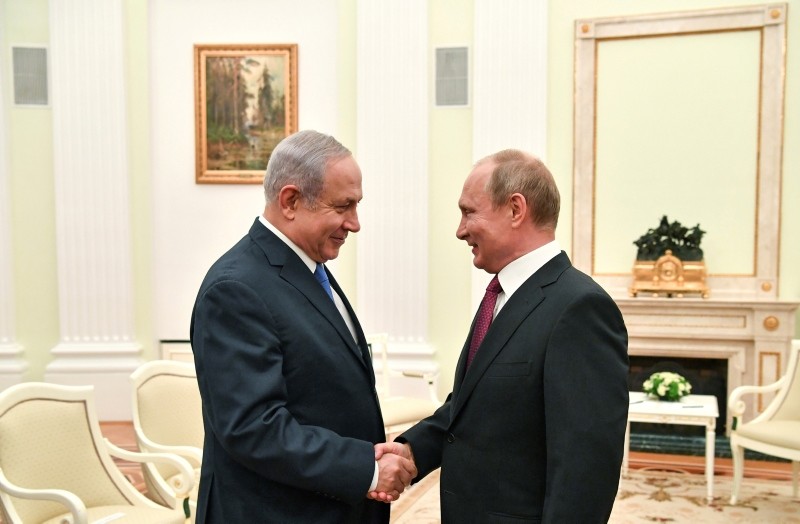 "We won't take action against the Assad regime, and you get the Iranians out," the official, who requested anonymity, quoted Netanyahu as telling Putin during a meeting in Moscow.

Russia was already working to distance Iranian forces from areas of Syria near the Israeli-occupied Golan Heights and had proposed that they be kept 80 km (50 miles) away but this fell short of Israel's demand for a full exit, the official said.

While the Russian and Israeli leaders sat down for talks in the Kremlin, a senior Iranian envoy also headed to Moscow amid intensive Syria-focused diplomatic efforts ahead of Putin's summit in Helsinki on Monday with President Donald Trump.

Netanyahu underlined warm ties between Russia and Israel, emphasizing what he described as their key stabilizing role for the Mideast.

"Every visit like this is an opportunity for us to act together and try and stabilize the situation in our region and increase security and increase stability," Netanyahu said. "Obviously, our focus is on Syria and Iran. Our opinion is known that Iran needs to leave Syria — that is not something new for you."

Both the United States and Israel are concerned about Iran's growing military presence in Syria, where it has provided crucial aid to Assad's forces.

Israel has repeatedly said it will not allow Iran to establish a permanent presence in a postwar Syria.

Russia, another top key ally of Assad, has warned it would be unrealistic to expect Iran to fully withdraw from the country.

However, there have recently been signs of an emerging compromise among key players.

Media reports suggested that at Monday's meeting in Helsinki, Putin and Trump could reach a deal that would envisage the deployment of Syrian government forces alongside the frontier with the Israeli-held side of the Golan Heights and the withdrawal of Iranian forces and their proxy Hezbollah militia from the area.

While Russia and Iran have both deployed forces to Syria to help prop up Assad's government, their interests do not always converge. Russia also has maintained warm ties with Israel and demonstrated a readiness to take its security interests into account.

"We know about your concerns, let's have a thorough talk about them," Putin told Netanyahu before reporters were asked to leave the room.

In a reminder of the volatile situation, Netanyahu pointed at an incident earlier Wednesday in which the Israeli military fired a Patriot missile to shoot down a drone that had infiltrated Israeli airspace from Syria.

"We will continue to act decisively against any spillover and any infiltration of Israeli territory or airspace," Netanyahu said.

He added that Israel expects Syria to strictly observe a 1974 deal that set out a demilitarized zone along their frontier and limited the number of forces each side can deploy within 25 kilometers (15 miles) of the zone.

Russian Defense Minister Sergei Shoigu said in an interview with Italian newspaper Il Giornale published Wednesday that Moscow hopes that Israel and Iran will both display caution and avoid a showdown.

"Their use of military force in Syria would inevitably lead to an escalation of tensions across the entire Middle East region," he said. "In that context, we rely on peaceful diplomatic means to resolve any differences and expect both sides to show restraint."