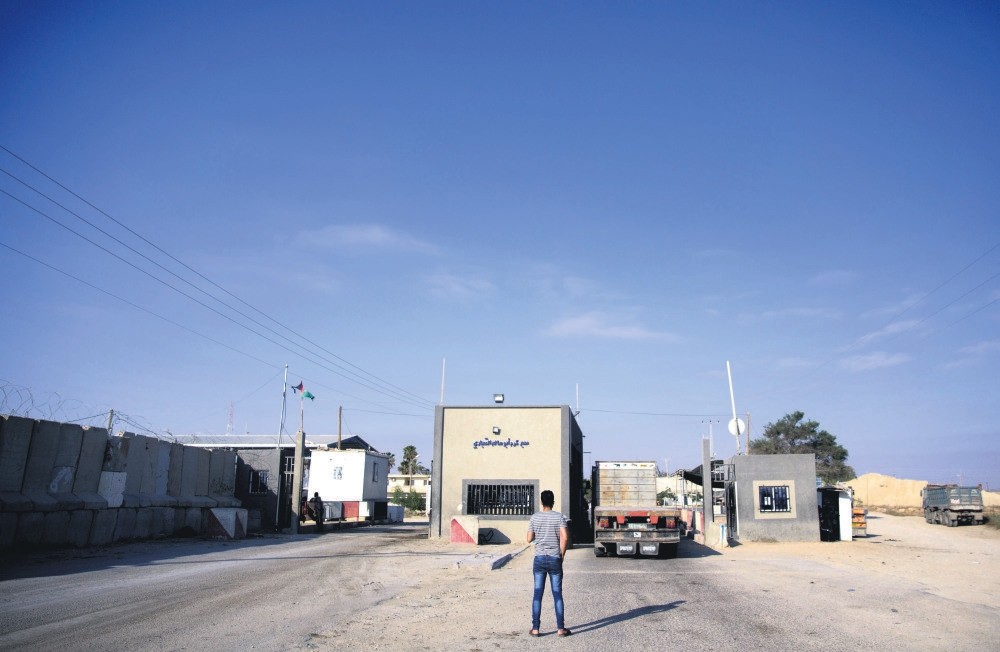 A man stands on the Palestinian side of the Israeli Kerem Shalom cargo crossing near Rafah in the southern Gaza Strip, July 10.
by Compiled from Wire Services
Jul 11, 2018 12:00 am

Fresh Israeli sanctions on the blockaded Gaza Strip, including restrictions on the movement of goods, went into effect yesterday despite criticism from the international community. Trucks loaded with humanitarian needs only were allowed yesterday into the Palestinian territory through the Kerem Shalom crossing, south of Gaza, according to an Anadolu Agency (AA) reporter.

On Monday, Israel imposed fresh sanctions on the Palestinian territory, including restrictions on the movement of goods and a reduction of the area off Gaza's coast in which Palestinian fishermen are allowed to ply their trade. According to a statement released by the Israeli army, the Kerem Shalom border crossing will be closed in response to "incendiary kite attacks" by Palestinian activists. The military statement did not say how long the crossing, which had served as Gaza's only functioning commercial crossing, would remain closed.

Local authorities on the Palestinian side of the crossing said they were told by the Israeli side that only fuel, foodstuffs, health and medical materials, livestock and feeds would be allowed through the terminal. Palestinian economists have decried the Israeli sanctions, warning that the move would aggravate Gaza's already dire humanitarian situation.

U.N. peace envoy Nickolay Mladenov yesterday voiced concerns over Israel's decision to impose fresh sanctions on the blockaded Gaza Strip. "I'm concerned by the consequences of Israel's decision to temporarily suspend imports and exports with the exception of basic humanitarian supplies through the Kerem Shalom crossing," Mladenov said in a statement. "Humanitarian assistance is no substitute for commerce and trade. I urge the authorities to reverse this decision," he said.

The U.N. envoy called on the Palestinian group Hamas and other factions in Gaza to do their part by "maintaining calm, stopping incendiary kites and preventing other provocations," as reported by AA. The U.N. "is continuing its engagement with Israeli and Palestinian counterparts, as well as regional and international partners, to reduce tensions, support intra-Palestinian reconciliation and resolve all humanitarian challenges," Mladenov said.

In the years-long-embargoed enclave, the humanitarian situation has gotten worse each day. The strip was heavily battered in July-August 2014 in a war between Israel and Hamas that killed more than 2,200 Palestinians and 73 people on the Israeli side. Its problems are exacerbated by a decade-old Israeli blockade. Many hospitals in densely populated Gaza declared that they have completely suspended services amid the Israeli blockade that has resulted in electricity cuts and a lack of fuel to run generators.

People predominantly rely on gasoline-fueled generators and solar panels to keep their refrigerators running and to have access to hot water. Considering that oil prices are high due to the blockade, Gazans are in a dire situation. Therefore, hundreds of people engaged in a protest against Israel and the Palestinian Authority (PA) as international rights groups warn that there might be a total collapse of basic services. With only three hours of electricity available per day, the U.N. warned that half of Gaza's population is in need of humanitarian aid.