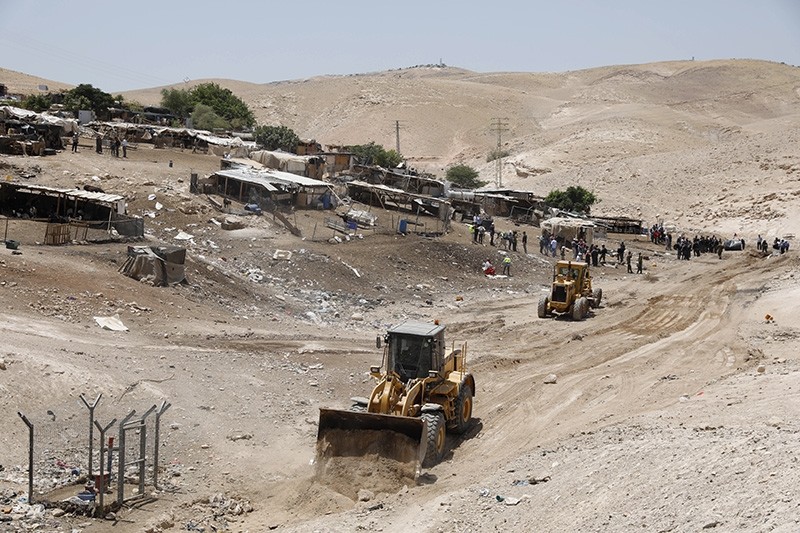 Israeli tractors work at the entrance to the Palestinian Bedouin Village of Khan al-Ahmar located between the West Bank city of Jericho and Jerusalem near the Israeli settlement of Maale Adumim, July 4, 2018. (EPA Photo)
by reuters
Jul 12, 2018 12:00 am

Israel's top court deferred on Thursday the planned demolition of a Bedouin village in the occupied West Bank that has stirred Palestinian outrage and international concern.

A Supreme Court justice last week issued an 11th-hour injunction against the Khan al-Akhmar demolition at the request of the villagers, who said their attempts to secure building permits had been ignored by Israeli zoning authorities.

Responding this week, the state rejected the appellants' argument as false and as an attempt to buy time, noting that the Supreme Court had previously approved the demolition.

In Thursday's decision, the Supreme Court justice said both sides would be summoned for a hearing by Aug. 15. The court will set the date when it assigns a wider panel of judges. Until then the demolitions are effectively on hold.

The state said it wanted the case decided as soon as possible. Village lawyers said they were ready for the hearing.

Around 180 Bedouin, raising sheep and goats, live in tin and wood shacks in Khan al-Ahmar. It is situated outside Jerusalem between two Israeli settlements.

Israel said it plans to relocate the residents to an area about 12 km (seven miles) away, near the Palestinian village of Abu Dis.

But the new site is adjacent to a landfill, and rights advocates say that a forcible transfer of the residents would violate international law applying to occupied territory.

Most countries consider settlements built by Israel on land it captured in the 1967 Middle East War as illegal, and an obstacle to peace. They say they reduce and fragment the territory Palestinians seek for a viable state in the West Bank, East Jerusalem and the Gaza Strip.