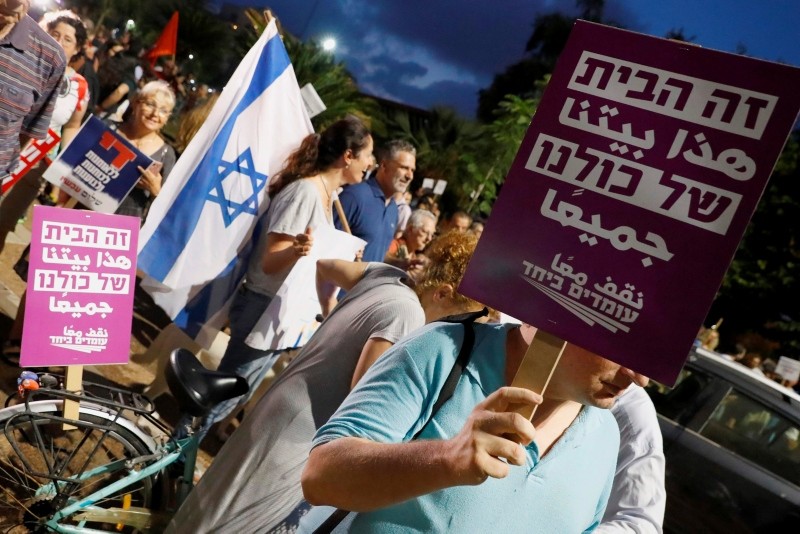 Demonstrators attend a rally to protest against the 'Jewish Nation-State Bill' in the Israeli coastal city of Tel Aviv on July 14, 2018. (AFP Photo)
by Associated Press
Jul 16, 2018 12:00 am

An Israeli parliamentary committee deliberated Monday on the final draft of a contentious legislation that would define Israel as the nation-state of the Jewish people.

The government says the bill will merely enshrine into law the country's existing character. But critics say it excludes the country's Arab minority, which makes up about 20 percent of Israel's population.

Israelis opposed to the bill, deeming it discriminatory, have taken to the streets to protest in large numbers on Saturday in the capital Tel Aviv. The country's ceremonial president from the ruling Likud party, Reuven Rivlin, who rarely delves into domestic politics, warned against clauses that appeared to encourage segregation and the downgrading in status of the Arabic language.

Last minute deliberations between the coalition partners appeared to remove some of the more problematic language. But the Israel Democracy Institute, a nonpartisan think tank, said the bill still threatened to undermine Israel's democratic values.

A vote on the bill, which is defined as a "basic law" with constitutional standing, is expected this week. If passed, it will likely face a Supreme Court challenge.

Israel's 1948 declaration of independence outlined its nature as a Jewish and democratic state, a delicate balance the country has grappled to maintain for 70 years. The bill, which has been bouncing around in various forms for years, looks to legislate the country's core identity.

But Amir Fuchs, head of the Defending Democratic Values program at the Israel Democracy Institute, said it marked a withdrawal from Israel's founding democratic principles. He warned that should it pass it could hinder the power of the courts, harm minority rights and damage relations with the Jewish diaspora.

"The main goal is for the 'Jewish' element to take precedence over the 'democratic' element, to change the balance," Fuchs explained. "It's part of a national and nationalistic process."

Prime Minister Benjamin Netanyahu has vowed that Israeli democratism will continue to maintain individual and minority rights. "But the majority also has rights and the majority decides," he said at a recent event. "The vast majority wants to guarantee the Jewish nature of our country for generations."

Netanyahu and Naftali Bennett, head of the nationalist Jewish Home party, reached a compromise agreement late Sunday to drop the bill's most charged clause — allowing for the establishment of "separate communities" that critics derided as racist. Instead, a vaguer reference to considering the promotion of Jewish communities as a "national value" was inserted that was more likely to withstand a legal challenge.

Other charged clauses, such as making Hebrew the only national language and downgrading Arabic's status, could also be amended by the time the final draft comes up for vote.

"The nationality bill is dangerous. It is threatening what remains of a so-called democracy. It is targeting the Arab minority in Israel," said Ahmad Tibi, an Arab lawmaker.

Many Israelis wondered why it was even necessary to legislate the country's obvious character and questioned whether it would have any practical implication, beyond stoking domestic tensions and drawing international criticism.

"I think it is a shame that in the second part of 2018 Israel has to pass such a law," said Jerusalem resident Uri Dromi. "Israel is a Jewish state. Period. Israel doesn't need any law to ascertain its Jewish character."

But Bennett, who was pushing for an even stronger version, said it was important to chart Israel's moral compass against potential future legal appeals that could undermine its character.

"The moment we define that it is the nation-state of the Jewish people, and the Jewish people only, we establish for the courts that this is a constitutional value," he told Israel's Army Radio Monday. "It has practical implications and I think it is a proper law, even if it is full of compromises."