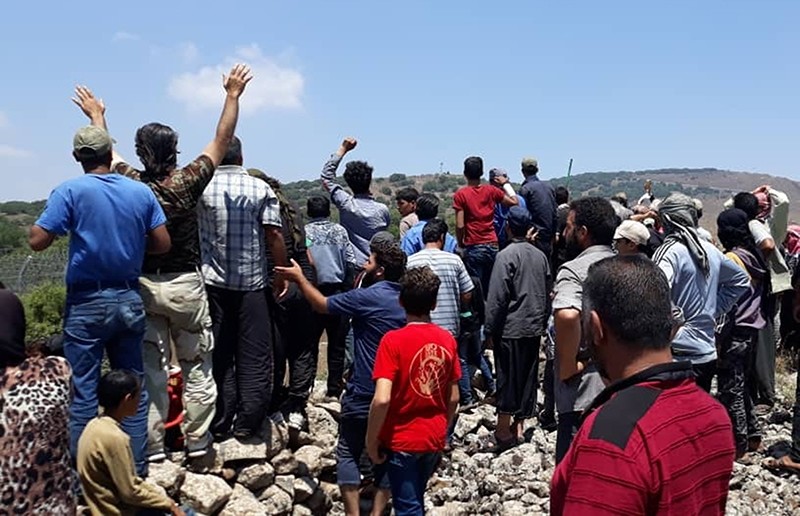 Syrian refugees march toward the Israeli security fence demanding help on the Syrian side of the Golan Heights in Quneitra province on July 17, 2018. (AA Photo)
by Associated Press
Jul 17, 2018 12:00 am

Dozens of Syrians marched toward the frontier with the Israel-occupied Golan Heights on Tuesday fleeing the Syrian regime offensive in southwestern Syria. The displaced waved white flags at the Israeli soldiers before they turned back, according to activists.

The brief protest on the frontier comes as Syrian and Russian airstrikes intensified in the Quneitra countryside and western Daraa province.

Earlier on Tuesday, at least 10 civilians were killed when a suspected Russian airstrike hit a school that serves as a shelter in the village of Ain el-Tineh in Quneitra countryside, about 7 kilometers (4 miles) from the Israeli frontier, according to a Syrian search and rescue team. 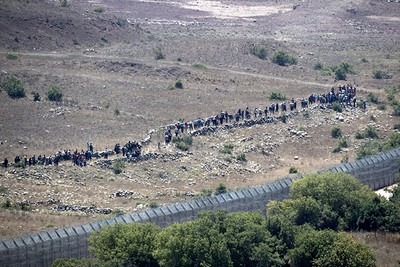 Moaz al-Assaad, a photographer in Quneitra, said by the time he made it to the frontier the protesters had dispersed. Israeli media reported that Israeli soldiers shouted through loudspeakers asking the crowd to turn back.

The International Rescue Committee said the regime's advance has trapped tens of thousands of displaced Syrians along the frontier with the Golan Heights, which Israel occupied in 1967. The aid group said there are urgent concerns for the safety of around 160,000 who fled to the area earlier this month and are now caught between the frontier and the advancing Syrian regime army.

The IRC estimated that around 5 percent of the displaced people are living out in the open with only trees to provide shelter.

"There really is nowhere else for these people to go and seek safety. They can hear the fighting getting closer and worry it's only a matter of time before the front line reaches them," said the IRC's Mark Schnellbaecher.

The United Nations said last week that over 230,000 people have been displaced since June 17 in southwestern Syria, which borders Jordan and the Golan Heights. Jordan has said it will not open its borders to the newly displaced Syrians.

Since June, Syrian regime troops and allied forces have seized control of most of Daraa province, including the eponymous provincial capital which was the cradle of the uprising against Bashar Assad seven years ago. Hundreds of fighters and their families were evacuated to northern Syria after a deal with the regime.

With control of Daraa in its hands, regime forces have turned their focus to the area near the frontier with Israel to clear the last pockets of the opposition.

On Tuesday, Khaled Solh of the Syrian Civil Defense said a school building in the village of Ain el-Tineh, used to shelter families who have been forced to flee their homes, was hit by a suspected Russian airstrike. Russia is supporting Assad's forces in its military campaigns around Syria.

Al-Assaad, the photographer, said he counted at least 20 wounded at the scene of the strike, including children.