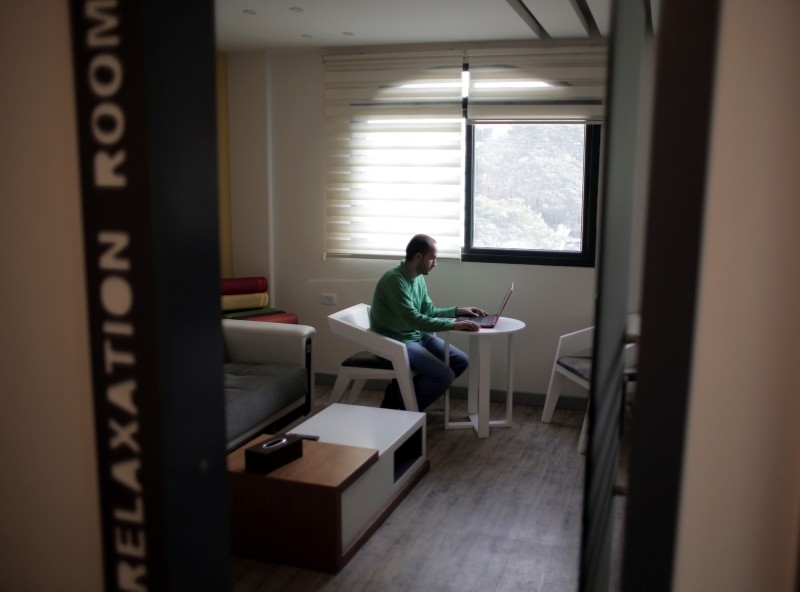 In this Nov. 16, 2015 file photo, a Palestinian employee takes a break in the relaxation room at the office of the sartup firm Haweya for Information Technology, in Gaza City. (AP Photo)
by Associated Press
Jul 18, 2018 12:00 am

A Palestinian startup company touted as a model for Gaza entrepreneurship is struggling to recover after its office was badly damaged last weekend in an Israeli airstrike.

The office of Haweya for Information Technology was among dozens of buildings damaged on Saturday in a flare up of Israeli violence against Gaza.

Staffers began this week to clean up the premises, sweeping the shattered glass off the floor, removing destroyed computers and printers and cleaning the dust-covered furniture.

The company was among dozens of houses, a university lab, a mosque and an art gallery damaged when the Israeli military hit what it said was a nearby training facility for Palestinian resistance movement Hamas, which governs the strip.

The startup was featured in an Associated Press story in 2015 as a model of the emerging high-tech entrepreneurship trying to overcome Gaza's isolation and access restrictions.

Haweya was a rare success story in Gaza, having employed 24 young engineers, designers and web developers in a territory where youth unemployment stands at 60 percent, according to the World Bank.

Its owner and founder, Mohammed Qudih, estimated the damages from the airstrike at around $13,000.

However, buying new equipment may cost more because prices began to spike this week as Israel imposed further restrictions on the coastal strip, with new limitations on its only cargo crossing with Gaza because of the continued hostilities.

Even after Hamas agreed to a cease-fire late on Saturday, incendiary kites and balloons have continued to float from Gaza into southern Israel, setting off fires that have damaged farmlands.

Qudih says the timing is "unfortunate."

"We are closing for a certain period that I hope won't last for long due to the damage and the materials we lost, which are essential for our work," he said.

"They actually destroyed the company's belongings but did not kill our ambition and dreams," he added.

Israel and Egypt imposed a blockade on Gaza after Hamas seized the territory in 2007. Israel says the restrictions are crucial to prevent Hamas from acquiring weapons. Critics say the blockade is tantamount to collective punishment of Gaza's 2 million people.

The blockade has devastated Gaza's economy, made it virtually impossible for people to enter and exit the territory, and left residents with just a few hours of electricity a day.