Israel to partially reopen goods crossing with the blockaded Gaza 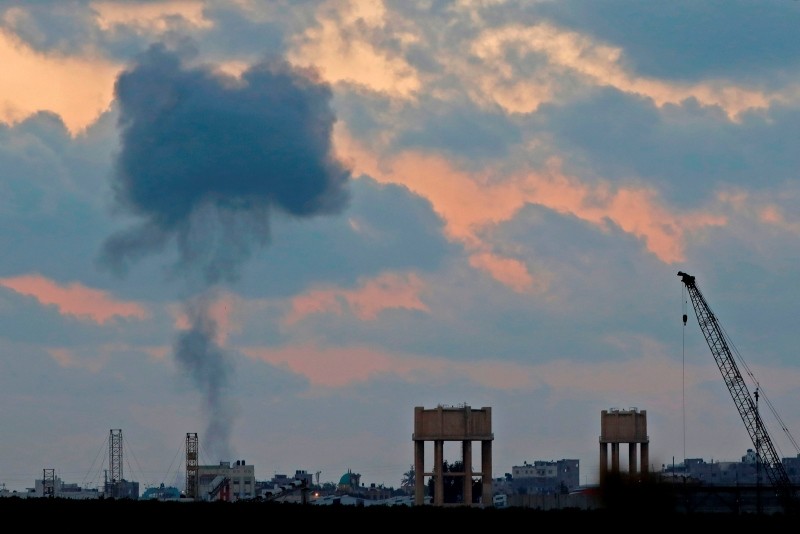 A picture taken on July 20, 2018, from across the border with the Gaza strip near the southern Israeli Kibbutz of Nahal Oz, shows a smoke plume rising from an explosion during Israeli bombardment in Gaza City. (AFP Photo)
by French Press Agency - AFP
Jul 24, 2018 12:00 am

Israel will partially reopen its only goods crossing with the blockaded Gaza Strip later Tuesday, a minister said, after closing it July 9 over border tensions and kites carrying firebombs to burn Israeli farmland.

"Defense Minister Avigdor Lieberman decided that Kerem Shalom will partially reopen and as of today at 12:00 pm (0900 GMT) it will be possible to transfer gas and fuel into the Gaza Strip, in addition to food and medicine," Lieberman's office said.

The statement noted that the number of kites and balloons carrying firebombs into Israeli territory had been reduced but not totally eliminated.

It said the crossing could return to full activity soon "conditioned on the full cessation of fire-balloon launches and friction on the fence."

Palestinians in Gaza see the kites and balloons as legitimate resistance against Israel's more than 10-year blockade.

The partial reopening follows urgent warnings from United Nations officials that emergency fuel supplies are running low in the Gaza Strip and that the shortage is starting to affect hospitals and water sanitation.

The coastal enclave suffers from a severe lack of electricity and relies on fuel-powered generators during outages that last hours at a time.

Israel and Hamas, the group that runs the Gaza Strip, reached a ceasefire at the weekend following a major flare-up of violence on Friday.

Israel had carried out a wave of air strikes killing three Hamas members after one of its soldiers was shot dead along the Gaza border.

There have been months of tension along the border, where mass protests and clashes began on March 30 and have continued at varying levels since then.

Hamas and Israel have fought three wars since 2008.