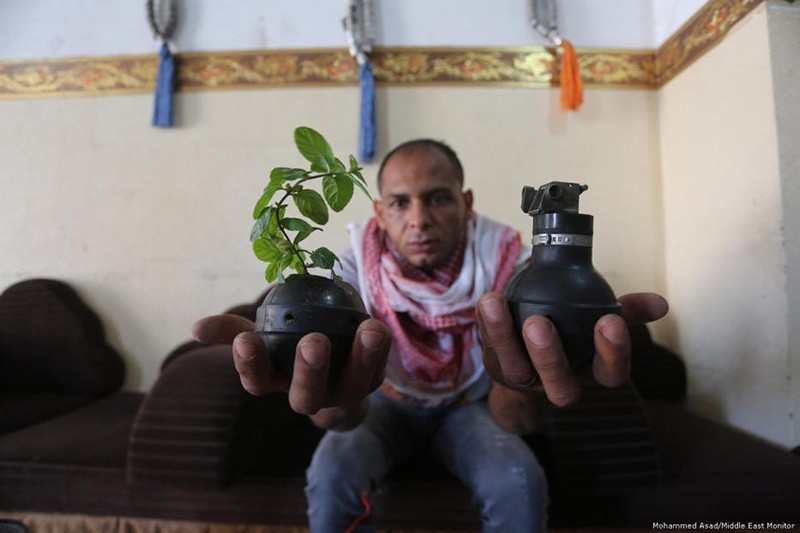 A Palestinian man in Gaza has been converting used tear gas canisters and bombs used by Israeli troops against Gazan protesters into works of art.

Abdul Karim Abu Ataya, 34, collects the vestiges of the conflict at the eastern Gaza border and transforms them into flower pots and decorative strings of prayer beads to "send a message of peace to the world."

"The occupation forces have been firing gas canisters at us, so I thought I'd use them to create prayer beads and flower pots," he told the Middle East Monitor, adding that he has been participating the Great March of Return and calling for an end to the yearslong siege on the Gaza Strip.

"They have fired them at us to harm us, but we want to use them to send a message of life and peace," he said.

Ataya cuts the tops off the smoke bombs, fills them with soil and plants seedlings.

According to the MEMO article, Ataya said the art also sends "a message of love and longing to our lands, our lands that our ancestors fled from."

"The occupation says that the old will die and the young will forget, but no. We remember, even more than our grandfathers," he added.

Israeli forces have killed at least 140 Palestinians and injured thousands more in protests along the Gaza border since a campaign was launched on March 30 to demand the right to return to ancestral lands that are now part of Israel.

They also demand an end to the 11-year Israeli-Egyptian blockade of the Gaza Strip, which has gutted the coastal enclave's economy and deprived its 2 million inhabitants of many basic commodities.