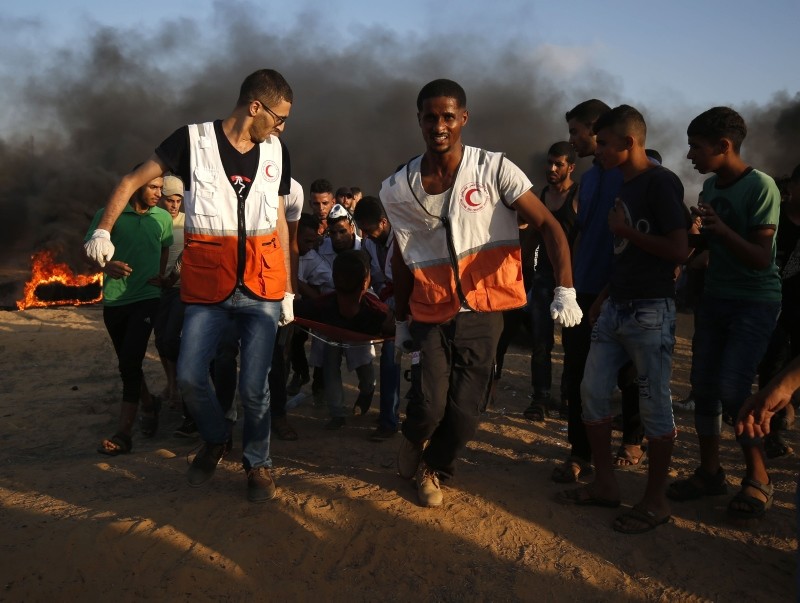 Palestinian protesters and rescuers carry a wounded protester during a demonstration at the Israel-Gaza border, in Khan Yunis in the southern Gaza Strip on August 3, 2018. (AFP Photo)
by Associated Press Aug 08, 2018 12:00 am

A U.N. aid agency Wednesday called on Israel to allow emergency fuel into the Gaza Strip to avert the shutdown of hospitals and sanitation facilities.

Jamie McGoldrick, the United Nations' humanitarian coordinator for the Palestinian territories, in a news release called Israel's restriction of fuel imports "a dangerous practice, with grave consequences on the rights of people in Gaza."

Later on Wednesday, Israel's military said shots were fired from Gaza at civilians working on the barrier separating the territory and Israel, damaging a vehicle. The gunfire came amid continued attempts by Egypt to broker a broad cease-fire deal between Israel and Gaza's Hamas group. There was no immediate comment from Gaza.

Israel halted the supply of petroleum and natural gas to Gaza last week in response to incendiary kites and balloons launched from Gaza into southern Israel. Israel temporarily suspended fuel shipments to Gaza in July for similar reasons.

The almost daily airborne arson attacks have been part of months of weekly border protests led by Hamas that rules Gaza aimed in part at drawing attention to the Israeli-Egyptian blockade imposed after it took control of the territory in 2007.

The demonstrations have been fueled in large part by pervasive despair caused by the blockade that has caused widespread economic hardship and left the coastal territory with crippling fuel shortages and just a few hours of electricity a day.

Over the past four months, 158 Palestinians have been killed by Israeli fire, including at least 120 in the protests near the fence and others in Israeli air strikes and other incidents elsewhere in Gaza, according to the Gaza Health Ministry and a local rights group. Twenty-four of the slain protesters were minors, the ministry has said. One Israeli soldier was killed by a Gaza sniper during this period.

Israel says it is defending its border and nearby communities and accuses Hamas of using the protests as cover for attempts to breach the fence and carry out attacks.

Mahmoud Daher, of the World Health Organization in Gaza, said in a telephone interview "the situation is very serious." He said by the end of the month, all fuel supplied by the U.N. will run out "and the problem is there is no sign of renewed funding from donors in the horizon."