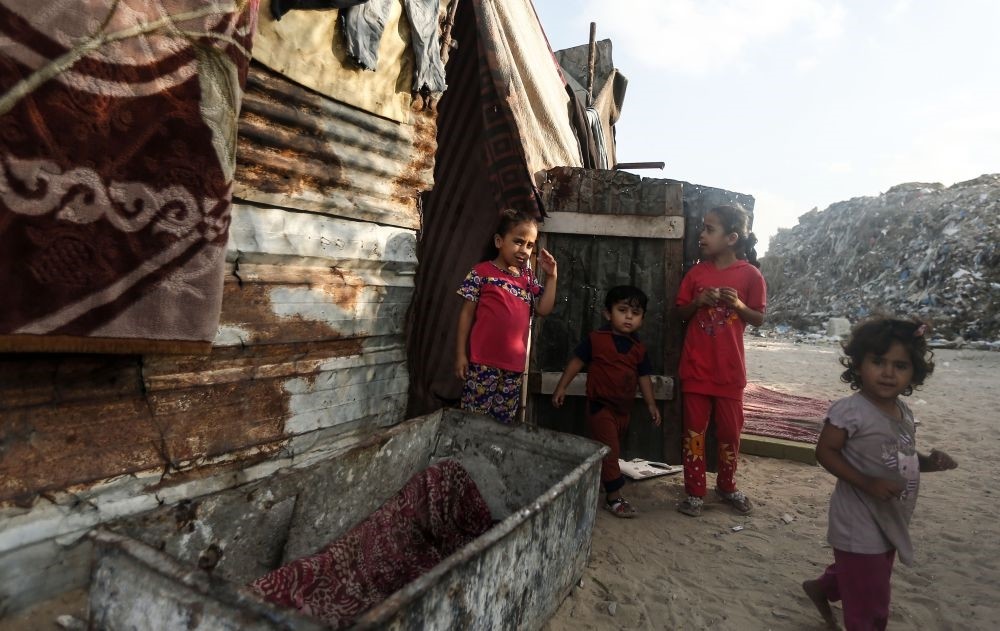 Palestinian children gather in front of a tin house in an impoverished neighborhood of the Khan Younis refugee camp, southern Gaza Strip, Aug. 25.
by Daily Sabah with Wires Aug 28, 2018 12:00 am

After the 2014 Gaza war, at least 2,000 homes still require reconstruction as around 20,000 Palestinians are waiting to return home

Four years after the 2014 Gaza war, thousands of Palestinians are still unable to return to their homes which were destroyed by Israeli attacks. The head of the Popular Committee to End Gaza's Siege, Jamal al-Hudari said in a statement that around 20,000 Palestinians, whose houses have been severely damaged during the Israeli onslaught, remain homeless. Al-Hudari also underscored the need of 150 million dollars for the reconstruction of these damaged homes, while urging the international community to find a solution for Gazans. He called on Egypt and Norway, which hosted the Gaza donor conference in Oct. 2014, to pressure Israel not to prevent construction materials and aid entering the border.

In 2014, the Israeli army launched a military operation on Gaza with the claim that Hamas was carrying out terror activities, including the kidnapping of an Israeli soldier. However, the weeks-long operation cost the lives of thousands while destroying infrastructure, medical facilities and schools. According to U.N. figures, 17,200 homes were damaged or destroyed in Gaza's tiny and teeming enclave of two million people. It was also announced that 73 mosques and 24 schools were totally destroyed while thousands of buildings were damaged. The Israeli incursion into Gaza that started on July 7 lasted 51 days, killed 2,158 civilians and more than 11,000 people were injured. Several rights groups completed their investigations and accused Israel of committing war crimes for using disproportionate or indiscriminate force and failing to prevent civilian deaths. An Israeli investigation found 72 civilians were killed in an attack mistakenly.

Since Israel's 11-year blockade, the Gaza Strip has suffered under a crippling Israeli and Egyptian blockade that has gutted its economy and deprived its roughly two million inhabitants of many vital commodities, including food, fuel and medicine. In the long-embargoed enclave, the humanitarian situation has grown worse each day. According to Palestine's official statistics agency, the poverty rate in Gaza reached 53 percent in 2017, with at least 250,000 people, facing unemployment. An ongoing Israeli blockade, imposed since 2006, is believed to be the primary reason for economic stagnation.

Fuel shortages in Gaza have contributed to chronic power outages that have left its residents with just a few hours of electricity per day. The United Nations warned that the closure of the crossing would make the situation even worse. Israel also expanded Gaza's fishing zone, in waters under Israeli naval blockade, from three to nine nautical miles off the southern coast and to six nautical miles in the north, the head of Gaza's fishermen's union said. The Oslo interim peace accords in the early 1990s set a 20 nautical mile limit, which was never implemented.