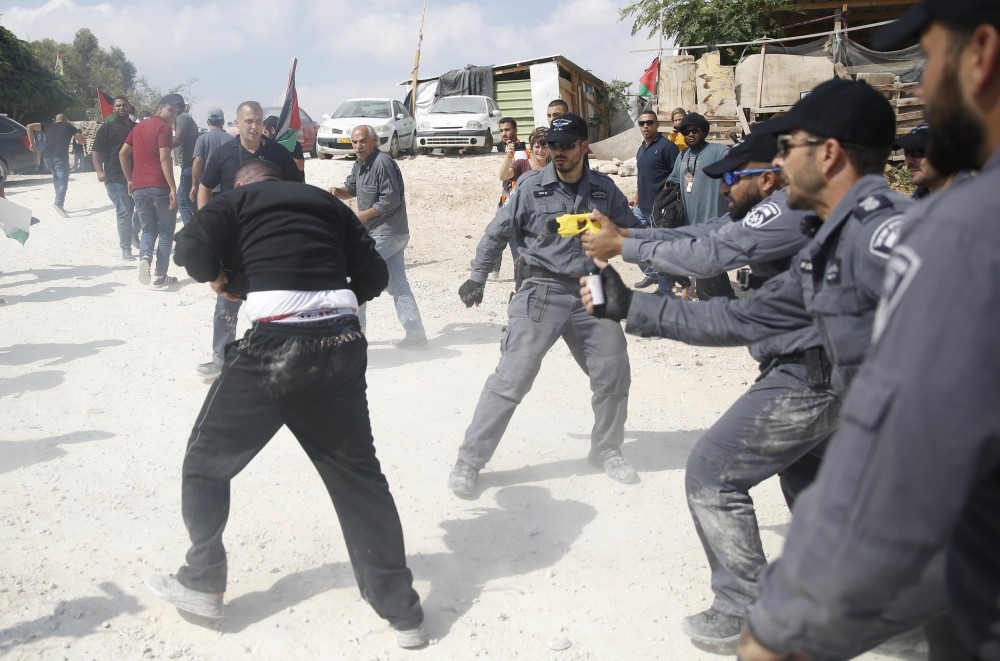 An Israeli policeman tasers a Palestinian activist in the Bedouin village of Khan al-Ahmar, West Bank, Oct. 17.
by Compiled from Wire Services
Oct 18, 2018 12:00 am

The International Criminal Court (ICC)'s chief prosecutor issued a warning yesterday that if Israel destroys a Palestinian Bedouin village on the West Bank that could constitute a war crime. ICC Prosecutor Fatou Bensouda said in a written statement that "evacuation by force now appears imminent," according to The Associated Press. "It bears recalling, as a general matter, that extensive destruction of property without military necessity and population transfers in an occupied territory constitute war crimes" under the Rome Statute treaty that established the ICC, she added. Israel's Supreme Court recently rejected a final appeal against plans to demolish the village, Khan al-Ahmar.

The ICC launched a preliminary probe in 2015 into allegations of war crimes and crimes against humanity in Israel and the Palestinian territories, in the wake of the Gaza war the previous year. It has yet to move to the next stage and open a full-blown investigation which could possibly lead to charges. International powers say the demolition of the village could enable Israeli settlement expansion that would eventually cut the West Bank in two, further threatening the prospects of an independent Palestinian state.

The Israeli court-ordered West Bank demolition of their homes has become a rallying cry for Palestinians. Four Palestinians were injured yesterday in clashes with Israeli troops in East Jerusalem's Bedouin village of Khan al-Ahmar, the Palestinian Red Crescent Society said in a statement. According to eyewitnesses, an Israeli military force, accompanied by bulldozers, approached the village on Wednesday morning, triggering clashes with local Palestinian youth and several foreign activists. "Israeli troops beat the Palestinians and activists and attacked them with tear gas," one witness told Anadolu Agency (AA).

The residents of Khan al-Ahmar are the descendants of Bedouins who were expelled from the Negev by Israel after 1948, and who were relocated to the West Bank. Around 180 Bedouin, raising sheep and goats, live in tin and wooden shacks in Khan al-Ahmar. It is outside Jerusalem between two Israeli settlements and was built without Israeli permits, which Palestinians say are impossible to obtain. Israel said it plans to relocate the residents to an area about 12 kilometers away, near the Palestinian village of Abu Dis. But the new site is next to a landfill, and rights advocates say that a forcible transfer of the residents would violate international law applying to occupied territory.