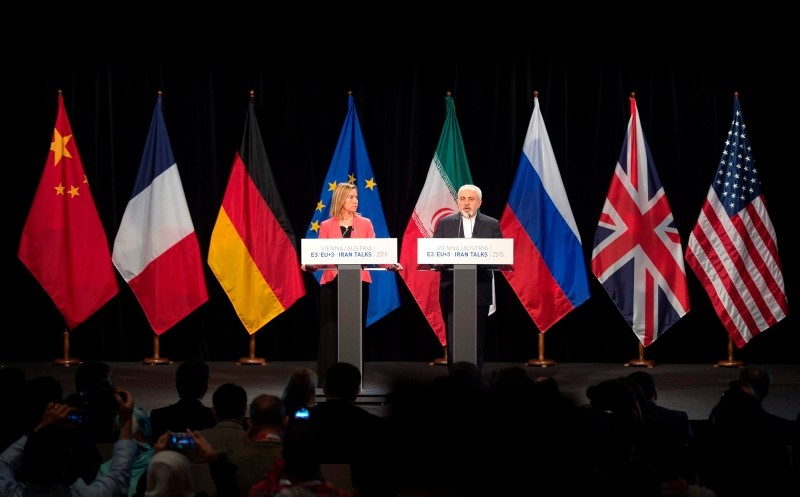 In this file photo taken on July 14, 2015 (L-R) High Representative of the EU for Foreign Affairs and Security Policy Mogherini and Iranian FM Zarif attend a final press conference of Iran nuclear talks in Vienna. (AFP Photo)
by Nov 02, 2018 12:00 am

France, Germany, Britain and the European Union issued a joint condemnation of the U.S. move to place fresh sanctions on the Iranian economy, vowing to protect European companies doing "legitimate" business with Tehran.

"We deeply regret the reimposition of sanctions by the United States stemming from their withdrawal from the Joint Comprehensive Plan of Action," the statement said in reference to the hard-fought 2015 nuclear deal with Iran.

Struck between world powers and Tehran after years of fraught negotiations, the deal was aimed at limiting Iran's nuclear capabilities in exchange for sanctions relief.

But U.S. President Donald Trump announced in May that he was walking away from the deal and would reimpose sanctions, leaving the EU scrambling to protect companies that have forged trade links with Iran.

Friday's statement from EU nations defended the deal as "essential for the security of Europe, the region and the whole world".

"Our objective is to protect European economic actors involved in legitimate commercial trade with Iran," it added.

Europe will also seek to "maintain financial channels operational with Iran and to ensure the continuation of Iranian oil and gas exports", it said.

U.S. officials said Friday that Washington was adding 700 individuals and entities to its Iran blacklist and pressuring the global SWIFT banking network to cut off Tehran when expanded sanctions are put in place next week.

U.S. Secretary of State Mike Pompeo said the sanctions were aimed at getting Tehran to halt its nuclear activities and what the U.S. says is broad support for "terrorism" in the region.

The EU says 12 consecutive reports from the International Atomic Energy Agency show that Iran has stuck to the terms of the deal.