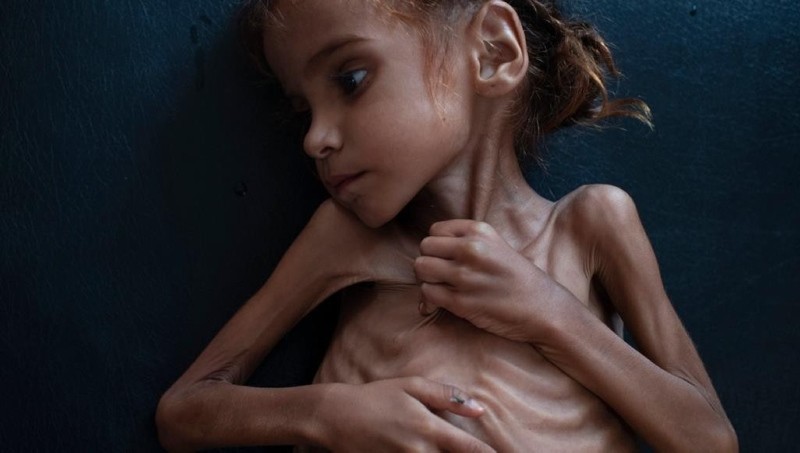 A seven-year-old girl whose photograph was featured by The New York Times last week has become one of the latest casualties of the devastating Yemen conflict, the newspaper reported Thursday.

Amal Hussain, who became a symbol of her country's humanitarian crisis after being photographed by Tyler Hicks, died in a Yemeni refugee camp on Thursday, her family told the Times.

"My heart is broken," Mariam Ali, the girl's mother, was quoted as saying. "Amal was always smiling. Now I'm worried for my other children."

Speaking to The Takeaway radio program earlier this week, Pulitzer Prize-winner Hicks described how photographing Amal was "difficult" and "heartbreaking" but also "important."

"She really sums up how tragic and how bad the malnutrition and the starvation have really become in Yemen," the photographer said.

Yemen, one of the Arab world's poorest countries, has been embroiled in a devastating power struggle between the Saudi-backed government and the Iran-backed Houthi insurgents for almost four years, with devastating consequences for civilians.

Fighting has escalated around Yemen's key port city of Hodeida, with more than 150 combatants killed over the weekend from both the rebel and government-backed sides, officials said Sunday.

Airstrikes and naval artillery pounded rebel positions around the Red Sea costal city, where government backed-troops are launching a major ground assault in an attempt to wrest it from dug-in rebels. The officials spoke on condition of anonymity for fear of reprisals.

Fierce fighting also erupted in the provinces of Bayda, to the south, and Saada, a Houthi stronghold in the north, they added.

Since 2015, a Saudi-led, U.S.-backed coalition supporting the largely exiled government has blockaded the rebel-held north and waged a devastating air campaign, causing thousands of deaths. The U.S. has sold billions of dollars' worth of arms to Saudi Arabia and provides logistical and other support to the coalition, while the coalition, which backs the exiled government, accuses the Houthis of acting as Iran's proxy.

The war has led to a humanitarian crisis that is one of the worst in the world, with three-quarters of Yemen's population requiring some form of life-saving assistance and protection, according to the United Nations Population Fund.

Last week, U.N. humanitarian chief Mark Lowcock told the U.N. Security Council that the war-torn country is in danger of being engulfed by an "imminent and great big famine" that could affect 14 million people, or around half of the population.

Lowcock said that the looming famine could be "bigger than anything any professional in this field has encountered during their working lives."

"Lack of food, displacement, poor nutrition, disease outbreaks and eroding healthcare" have also affected 1.1 million malnourished and lactating women, and if the situation continues to deteriorate, up to 2 million mothers may be "increasingly at risk of death," the U.N. Population Fund reported Thursday.