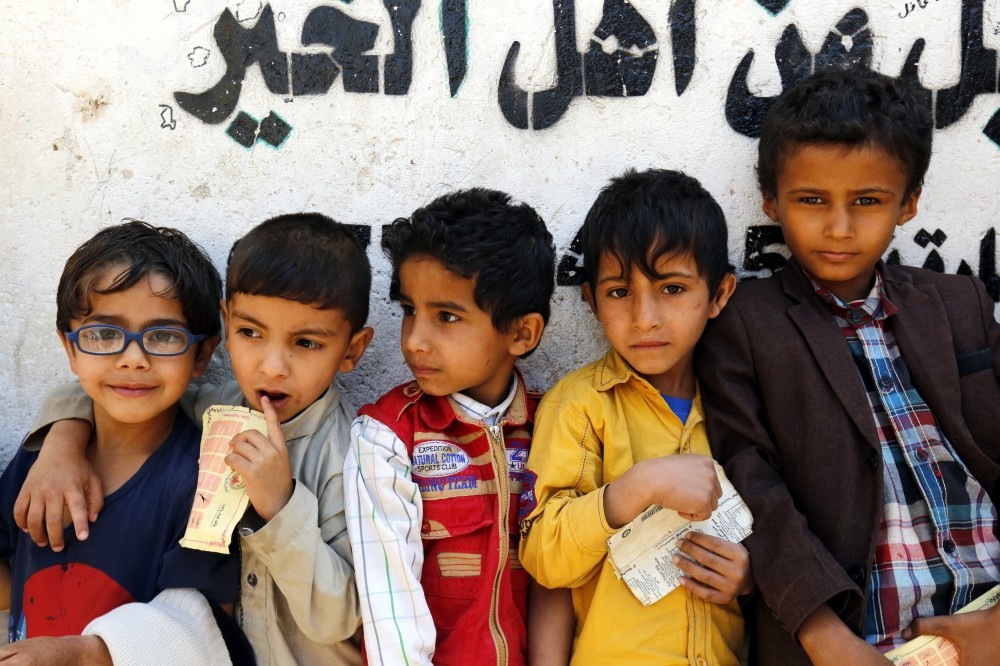 Conflict-affected children wait to receive their families' free food rations from a local charity, Sanaa, Nov. 3.
by Compiled from Wire Services Nov 08, 2018 12:00 am

The battle for Yemen's main Hodeida port has placed the lives of civilians in further danger as they struggle to live under a Saudi-led coalition blockade, that was imposed last year

One year after a Saudi coalition imposed a blockade on Yemeni ports temporarily halting life-saving supplies, Yemenis are still living a "never-ending nightmare," low on food and fuel, a senior aid official said on Tuesday. As the fighting flared this week in Yemen's main Hodeida port, where most food imports and relief supplies enter, leaving thousands trapped on the southern outskirts of the Red Sea port, according to the U.N.

Yemen, one of the poorest Arab countries, is locked in a nearly four-year-old war that pits Iran-aligned Houthi rebels against the government backed by Saudi Arabia, the United Arab Emirates (UAE) and the West.

For several weeks at the end of 2017, the Saudi coalition imposed a blockade on Yemeni ports which it said was to prevent Houthis from importing weapons. This had a severe impact on Yemen, which traditionally imports 90 percent of its food.

Jan Egeland, a former U.N. aid chief who now heads the Norwegian Refugee Council said since the blockade, food and fuel imports remain low and prices have soared, leaving millions on the brink of starvation as violence continues. "The past 12 months have been a never-ending nightmare for Yemeni civilians," he said in a statement, as reported by Reuters.

The battle for Hodeida has also endangered the lives of dozens of hospitalized children, the United Nations' children's agency said Tuesday. "Intense fighting in the Yemeni port city of Hodeida is now dangerously close to Al-Thawra hospital, putting the lives of 59 children, including 25 in the intensive care unit, at imminent risk of death," UNICEF said in a statement.

UNICEF reported that medical staff and patients in the hospital in southern Hodeida city, just 500 meters from the port, heard heavy bombing and gunfire. "Access to and from the hospital, the only functioning one in the area, is now imperiled," it said.

Yemen has been wracked by conflict since 2014, when Shiite Houthi rebels overran much of the country. Saudi Crown Prince Mohammed bin Salman, the former defense minister, and Saudi Arabia's allies launched Operation Decisive Storm in March 2015. Riyadh has accused the Houthi rebel group of serving as a proxy force for Iran, Saudi Arabia's archfoe in the region.

Civilians have borne the brunt of the conflict, which has killed over 10,000 people and sparked the world's worst humanitarian crisis. In September, the Saudi-led coalition admitted that mistakes were made in an August airstrike that killed 40 children, an event considered an apparent war crime by the U.N. human rights body. Saudi Arabia's alleged human rights violations are not limited to that country but have expanded beyond its borders, since there is an endless war in Yemen. The U.S. has made a call to end the war, but there was no reference to the future of its arms sales to Saudi Arabia. The U.N. has made no progress in attempts to get the warring sides to negotiate a peaceful resolution to the conflict.